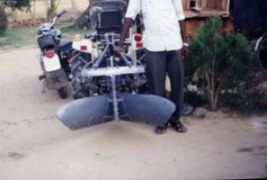 P.K. Jeyakrishnan (48 years), has studied up to eighth standard. He possesses about four acres of land and cultivates sugarcane, paddy and turmeric. Since his childhood, he was interested in developing new gadgets and he was very fond of making clay toys. In the initial years, he owned a power tiller and later he purchased a mini tractor. He has tried to invent and develop need based implements and tools for sugarcane fresh crop as well as for ratoon for weeding and earthing up the sides. The same can be used for turmeric also. Recently, he has developed a tractor drawn sugarcane leaf mulcher for ratoon crop, which is used along with the ridger and weeder attachment.

The ridger weeder developed by Shri Jeyakrishnan, attached to a Shakthi-Mitsubishi mini tractor, performs the weeding as well as earthing up operations simultaneously. Hence, there would be no need for separate weeding operation prior to earthing up. Moreover, the earthing is required only once, when this equipment is used.

The ridger is developed as an attachment to the three point hydraulic linkage of the mini tractor. The ridger comprises an upper main frame, a central shank and a ridger bottom.

The distance between the outer edges of the rear wheels of the mini tractor is 1.2 m and total width of the implement is about one meter. Hence, in crop rows of 1.5 m normal spacing, the implement can be very easily used without damaging the crop. The moisture level of soil should be enough for the tool to penetrate. The cutting tool penetrates and cuts the soil. The soil is cut up to 22.5 cm depth and is lifted up on the wing board on each side. The lifted soil is thrown on both sides. The tractor is moved in `alternating field machine pattern' in the field by going from one end of the field in one direction between first and second row and coming back in opposite direction after skipping the next two rows through fifth and sixth rows and alternating in a similar fashion. The machine can cover about 0.8 ha per hour depending upon soil type.

The ridger-weeder is unique as it does both weeding and earthing-up in a single operation in sugarcane crop. There is a saving in cost and time by more than 60 per cent. Since it helps in trash mulching and obviates the need for burning the same, it also contributes towards conserving moisture and improves organic matter content in the soil.