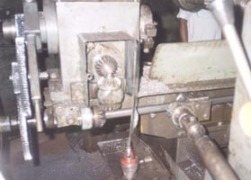 Balwant Singh (67 years), is a typical Ludhiana technician who lives and breathes only engineering and machines. He lives on the upper floor of his workshop, as is the usual practice with machinists of the town. His workshop is recognized as a dependable gear shop for machining large-sized worms and involute gears from castings or forgings. His son, since the time he was a little boy, has been assisting him in the workshop. In fact, he takes care of the machines when his father goes out for a lassi-break. Balwant Singh has made a couple of innovations with regard to gear cutting operations. He has made improvements in the methods based on his long experience to improve productivity. He has also modified the machine tools used for gear manufacture in order to improve the precision level of the gears manufactured. His son too has contributed in continual improvement of quality and productivity that the workshop has come to be known for.

He has modifications in longitudinal feed mechanism in helix-milling/hobbing attachment of milling machine. Gear-hobbing machines are employed to cut the teeth in the periphery of gear blanks made of cast iron or steel when the size of the gears is not too big. A milling machine is invariably employed for cutting large-size gears, when the face width is more than about 1-1/2 inches (38 mm). Hobbing machines give high outputs but they are specialized machines not suited for any other job except gear cutting. Indigenously-made gear hobbing machines cost up to Rs 3 lakh. It is not always possible to block that type of money in specialized machines as job work may not be available to feed them regularly. The other alternative is to use a milling machine fitted with a hobbing attachment. While this ensures reasonably high output, the machine can also be used for normal milling operations when there is no gear-cutting work. The output in case of a conventional hobbing attachment is however, not comparable to the output from modified hobbing machines. The output is limited because no more than two or three gear blanks can be machined at a time. When longer stacks of gear blanks are made, only the first two or three blanks are cut correctly; the variation in the tooth space becomes unacceptable after this much length. The inaccuracy occurs because of excessive vibrations when the over hang is long.

Balwant Singh probed the reason for excessive vibrations, which limited the blank length in the machine. He found that the culprit was the connection-arrangement between the hobbing attachment and the main spindle of the machine. The universal-joint coupling that transmitted power to the longitudinal-feed-screw was attached directly to the hobbing apparatus also. This created non-uniform motion leading to jerks in the feed-screw and this resulted in inaccuracies in the cut gears. Balwant Singh pondered over the limitation of the design, which compelled frequent loading/unloading of component, which in turn caused loss of productivity. Through a process of trial and error, he replaced the universal-joint coupling with a bevel-gear mechanism. The new system consisted of three sets of bevel gears to transmit the spindle motion to the hobbing attachment. The bevel-gear system is inherently superior to the universal-joint coupling because the velocity of the output shaft remains uniform throughout. This avoids jerks that cause unacceptable vibrations.

After incorporating the modification in the drive of the longitudinal feed-screw, stacks of gear blanks up to a length of 500 mm can be cut smoothly in a standard milling machine with consistent accuracy. This means that the number of job changes in a day is drastically reduced, thereby increasing the output without compromising on quality.

In a worm-teeth cutting, the in-feed of the cutting tool after every pass is usually not automatic. Heavy jobs of worm-thread cutting sometimes involve 800 passes of the tool to complete the job. The operator thus needs to operate the cross-slide 800 times between loading and unloading of the job. It is a tedious work. The handwheel has to be rotated several revolutions at a uniform, standard speed. If it is rotated too fast, the tool wear will be excessive and the surface finish of the component will be affected. If the handwheel is rotated too slow, it will take long a time to complete the job. Often, operators tend to avoid such worm-teeth cutting jobs and absenteeism becomes chronic.

Balwant Singh came out with an innovative solution to the problem. He selected a high-ratio worm-gear reducer from a junk shop and a used domestic fan motor. This he attached to feed the cross-slide. After trying out in a couple of jobs, he made some modifications in the ratio. Now, instead of having to turn the handwheel hundreds of times at uniform speed, the operator has only to press a switch to start and stop the motor. While removing the tedium of rotating the handwheel, the surface finish of the teeth is also improved because the motor's motion is very uniform. Balwant Singh made a further improvement by providing a set of limit switches to automatically start / stop the feed at every pass. The company that manufactures the machine was impressed by the innovativeness of the modification and bought the design from Balwant Singh. New machines manufactured by the company incorporate auto-feed mechanism conceived and developed by Balwant Singh.

The improvements made by Shri Singh improved the efficiency considerably and reduced the labour requirement. The fact that a major company licensed in, the design improvement by Balwant Singh shows the potential, the knowledge of workshop mechanics has for improving the productivity of the Indian Industry.