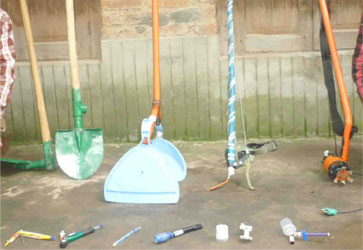 Refaz and Ishfaq (18) are twins from a small village in Anantnag district of Jammu and Kashmir. They never fail to surprise others with their creativity and hence they are known as the ‘Creative Twins’. They have an amazing line-up of ‘big ideas’, which includes a foldable water bottle, a hoe that also doubles up as a shovel, an easy apple catcher among others. Growing up in the remote village of Wandewalgam some 80 kilometers from Srinagar, they had little access to the outside world. Their father worked as a labourer in Delhi/ Jammu. Money was short and they had just enough for basic things. But this lack of resources shaped their creativity as they learnt to be self-reliant. Refaz remembers an Id when they were about four years old. “Our father had come home for Id. We were staring sadly at children playing with their new store-bought toys. But we couldn’t afford them. Our father noticed our unhappiness and took us outside promising us better toys than anyone else’s. He collected mud and showed us how to shape it into birds, people, cars and even snakes.” This became their favourite past time and they spent countless hours making these mud figurines that are proudly displayed in the house even today. In class five, they saw a JCB machine used in construction for the first time in their village. They were intrigued and set out making one of their own. Working hard for three weeks, they made a wooden model that could be operated by one person.

Twin Brothers Innovation Club As more ideas came, they wanted a place where they could discuss, share and work without disturbance. But there were no spare rooms in their home that could be used. Undeterred, they zeroed in on the storeroom on the roof. They got construction material from outside to put it back in shape. Unable to afford paint, the walls were covered with gift wrapping paper to brighten them up. And the ‘Twin Brothers Innovation Club’ was ready. It is populated with innovations in the making, awards won and sundry pieces of used wires and other equipment. The brothers come here to thrash out current ideas and work on new ones. All these ideas are duly noted down in their ‘Book of Ideas’, which already has more than 100 ideas. Collapsible water bottle for storing different liquids Standing in front of their house, twins Refaz and Ishfaq saw a little boy struggling with his water bottles on way to school. To beat the summer heat, he was carrying multiple bottles for different fluids. But it was a pain to manage them, especially after they were empty. Refaz and Ishfaq came up with a remarkably simple solution: a single bottle with separate compartments for different fluids. What’s more – once emptied, it collapses to become smaller! Combined Hoe and Shovel They belong to an agricultural family and sometimes help out in the fields. One day, they were out in the market to purchase a hoe and shovel. They wanted both tools but had just enough money for one. Not giving up, they innovated their way out of the problem by making a two-in-one tool that can do the work of both. It has a handle to which either a hoe or spade can be attached. NIF filed a patent for their device (3171/DEL/2011). Apple catcher Though apple trees are not too tall but still one has to use ladder to climb up for fruit plucking. As the plantations are mostly on slope or uneven ground, using ladder many times results in accidents. In order to enable a person standing on the ground to clip an apple and catch it in a net, the twins have made this device. It is a hand held agriculture tool, which can be used for plucking fruits. It consists of a rod, a cutter on its farther end, a clutch on its closer end to operate the cutter and a net below the cutter to catch the clipped fruits. When clutch is pressed, it cuts apple with help of scissor and the apple is collected in net. This arrangement allows the plucked apple to get collected so that apple won’t fall on the ground and won’t get damaged. Belt is tied on shoulder while catching the apples from the apple tree. Their other innovations include a drain cleaner, an injection breaker to safely get rid of small pieces, an egg breaker and a geometric pen also fitted with a clock, torch, pencil and compass. They mention that receiving an award from Dr. Kalam for their innovations in IGNITE 11 was like a ‘turning point’ for them. They got extensive coverage in both national and local media. They shared, “Since childhood, friends and relatives made fun of us. They looked down on our efforts towards innovating as they could not understand what we were doing. Winning this award and the following media coverage helped earn the respect of our community.” Just for Fun “What fun?” they ask in surprise. Like dedicated scientists, they believe in spending their time wisely and frown upon wasting it in trivial things. But exercise is important and they prefer to get theirs by walking through the forest. They enjoy looking at trees wondering “Why are they there?” or some such thoughts. They like Discovery channel, but since it is not available in their village, they have given up television. Dreams for the Future “We want to become scientists but because of not enough money we chose to study arts instead of science at school,” they mention. Although this wish could not come true, they are very confident about the future. With pride in their voice, they tell how their father always tells them to keep their hopes up when things get difficult. Their enthusiasm has also motivated their younger sister Runcy Jaan. Getting tired of washing dishes at home, she has come up with an innovative dish washer. She shared the idea with NIF where it is under evaluation. The brothers’ most cherished dream is to turn the Twin Brothers Innovation Club into a place where local kids can come to discuss ideas and conduct experiments. “We want to teach them how to look at a problem and how to find a solution. They should not give up their dreams just because others do not see them.” But here also, money is a constraint. Refaz says, “After the IGNITE award and media coverage, neighbourhood children started showing interest in our work. We told them if you get an idea, we will send it to NIF. But one student said, ‘You’re right – but experiments cost money.’” Their reply: “If you have a dream in your heart, don’t run after money. Run after success and work hard. Money will come.” It is this belief that keeps them moving forward from one innovation to the next.