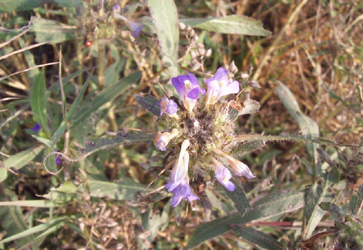 Naval Kishore Singh (59) is a farmer by profession. He is also a traditional knowledge holder and administers a very effective herbal medicine for curing ephemeral fever in animals.

Late Kailash Singh, father of Naval Kishore Singh was a well known traditional knowledge holder and a farmer. People from many nearby villages used to come to him to get medications for their cattle. Exposure to herbs and their uses thus came early to Naval Kishore. He obtained primary education from his village and later went to Varsaligunj for higher education but failed to pass matriculation. Soon after he got married and started helping his father in various household activities.

The first six children of the couple were girls. There was a lot of family pressure on him to get married again. But as he loved his wife much, he resisted all the pressures, trying to explain to the people that whatever happens is for the best. His wife later gave birth to two boys, both of whom are studying right now. After the death of his father in 1990, he had to take over the complete responsibility of his farm and his father’s small in-house ‘dispensary’. With limited source of earning and over half a dozen people to feed, their financial condition has not been well all these years.

It is very commendable that despite all financial hardships, Naval Kishore has never charged any money for his services from anyone, sometimes helping them even at the expense of his own work and time. His helpful nature has made him quite popular in the area. On inquiring about the hardships he had faced in his life, he calmly says, “Jo hota hain sab ishwar ki marzi se hota hain”- whatever happens is all God’s will. His wife, Jaywanti Devi, describes him as a soft spoken, jovial and friendly person who loves to meet and interact with people. He is good at heart, a bit extravagant and lives life his own way. She adds that he does what he feels like doing even if that brings loss to him.

Naval Kishore has a lot of herbal formulations for treating various diseases in both animals and humans. One of the herbal practices, Naval Kishore shared with NIF was related to a veterinary disease. He used a particular plant (name withheld for IPR reasons) for treating ephemeral fever, which was found to be novel after doing prior art search. NIF filed a patent (2243/CHE/2008) in his name. Clinical trials were undertaken and the results clearly indicated that major liver enzymes were not affected by the administration of the herbal formulation and that the protein metabolism was normal and liver was in healthy condition. The therapeutic efficacy was confirmed for alleviating the ailment by reducing the lameness and pain in the limbs of animal. A product named Ephelixin - 3D, an oral herbal medication has been developed based on this practice. NIF is looking for entrepreneur/companies to transfer the technology of this very useful drug for ephemeral fever.

The ever positive, Naval Kishore, is planning to open a small veterinary hospital for the treatment of animals if some funds could come his way.