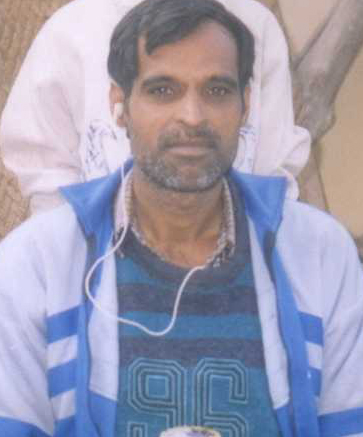 Innovator is educated upto eighth standard. He is 42 years old, married and has three children. He used to work in a LPG cylinder agency as a cylinder vendor. He has made an irrigation pump that runs on gas (using LPG cylinder) and running cost comes to only Rs 1.00 per hour. The innovator had already developed a gas driven motorcycle when he started experimenting with two_stroke engines of two-wheeler. After trying out Yamaha and Rajdoot engines, he selected the TVS moped as the most efficient and suitable one for his gas_driven pump. He took a water pump and fixed it to the TVS engine. The first problem he faced was that not enough torque was generated to start the engine. He also had to design a gas inlet. To convert the petrol engine into a gas-driven one, he removed the carburetor of the engine and made his own carburetor with a plastic box. To start the engine, he used the free-wheel of a bicycle. He wound a chain around the free wheel and made a pulling arrangement to start the engine. Once the chain is pulled, the free wheel rotates. Thus in turn rotates the coil generating current that goes to the spark plug. Rambilas is now a source of inspiration to his friends and people working with him.
In this innovation a moped engine is used to lift water. The important feature of this innovation is that it is driven by LPG, which makes it economic. Besides this gas based pump, innovator has also made a gas lamp. This gas lamp is a very simple attachment of a lamp with the gas stove. At the time of power failure, this lamp can be simultaneously used with the gas stove. He has also made a LPG driven three-wheeler. This is a hybrid of a motor cycle and three wheeler. The front portion comprises the motorcycle and the rear portion has got two wheels. A chain that drives the rear tyres is attached to engine of the motor cycle. The energy required for its movement is provided by the LPG. The cost is around 16000/-. The fuel efficiency is 1000-1200 km per LPG cylinder that turns out to about Rs. 0.28 per k.m.