Flameless Seal maker and others

Flameless Seal maker and others 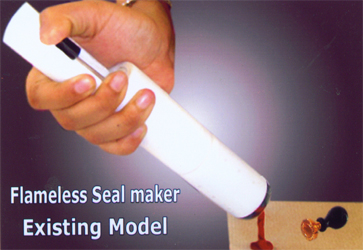 Hailing from Kanyakumari in Tamil Nadu, Masha is a very soft spoken girl and the favourite of her friends and teachers. Her passion in life is to do things differently and strongly believes in the proverb, “Take the path less travelled and the world will follow you”. Presently she is doing her II year B.E in Electrical and Electronics from SSN College of Engineering (NIF received her entries when she was still in school). Masha, passionate towards science, started designing science models from the age of 9. She is also a very talented dancer and an artist.  Her father, N. Kaja Nazeemudeen is a government servant and her mother, M.Sumaya Begam is a house wife. Insha Nazeem is her younger sister studying in VI standard. Family has been a strong support for Masha. Her parents never bothered about the expenses on her projects and her travels to different places for competitions, though it was a considerable portion of their income. Besides the prize money and sponsorship, their parents have spent close to Rs 5 lakhs from their pockets till now to bring her up to this stage.

Masha Nazeem, a young student, is a serial innovator and has developed eight very interesting projects including the flameless seal maker, which won her an award in the IGNITE 2009 competition of NIF.

The journey of innovations

Masha has been quite creative since her childhood. Different kinds of projects have been made by her starting in class fourth and are described below.

Burglar Alarm & VIP Security System: The alarm was a simple electro-mechanical device to alert about a burglary. She developed it for her science project when she was in class IV at the age of 9 years. Later she improved the project, comprehensively adding more features to develop the VIP Security System in Class VI.

Conveyor Belt System: Out of concern for the safety of her friends who had to cross a national highway every day for school, she thought the idea about a conveyor belt system in a sub way.  Students can off load their heavy school bags on the conveyer belt on one side of the road and cross over to the other side through the over head foot bridge. They can collect their bags on the other side using a cycle pedalling system, which moves the conveyer belts.

HI – Tech Train Toilet System:  This is a useful system for Indian railways to avoid the soiling of railway track at stations. In this proposed system, the toilet waste is stored in a horizontal and cylindrical storage tank fixed under each toilet of the train. This tank can be connected to an underground drainage system through pipes and can be emptied when the train stops at a station. Masha was in class seven when she conceived this idea. This project helped her to get the first prize in the Southern India Science Fair, two National awards & one International Award (World Toilet Organization, Singapore). She was also invited by the then President of India at Rashtrapati Bhawan. She also demonstrated the project before the Railway Boarding Meeting at Rail Bhawan, Delhi in the presence of the then Railway Minister.

Modified Fuel Dispenser: It is a very simple system to prevent accidental spill over of petrol/diesel while dispensing at the fuel station. A small roller ball has been inserted between the grip and the dispensing lever in the hand held dispenser. Thus only when the fuel nozzle is inside the tank of the vehicle, the ball will roll forward and downwards enabling the lever to be pressed. As soon the position changes to upright, the ball rolls back, and thus the dispensing lever cannot be pressed as the ball comes in between the lever and the grip.

Transparent Test Tool Kit (3TK box): It is a completely transparent box, which can safely keep all of the requirements of a student for an exam including exam ticket, pens, pencils etc. As it is completely transparent, students cannot hide anything inside it. She has demonstrated this 3TK box, an exclusive exam tool kit and its advantages with the Governor of Tamil Nadu, the Governor of Kerala, higher officials of the Education Department of Tamil Nadu, Minister for School Education and got appreciations.

Flameless Seal Maker: Sealing different confidential or legal documents of the government is a mandatory requirement. While returning from her school, Masha often used to visit her father’s office (sub treasury) where she noticed him sealing official documents. Sometimes, he also used to get burned from the candle while sealing. She wondered if there was an alternative way to do this and questioned her father who jokingly asked her to find a way. Taking this as a challenge, after a lot of hits and trials with different materials, she was finally able to develop the flameless seal maker.

Masha’s electricity operated flameless seal maker is made in hylam and polypropylene material, which is very light and handy. The user can load the lac pieces from the upper top. Using a small piston, the flow of the molten lac can be regulated. Temperature also can be controlled by thermostat control fitted inside the device. Using this seal maker, about 100 seals can be applied safely within 10 minutes. This seal maker is simple, handy, hassle free and device. Masha herself filed a patent for this device.

The possibility of using it by different government departments and by the Election Commission is being explored. This seal maker has been tested in two election booths in Kanya Kumari during the recent elections. This was the first time in India that an authoritative seal as affixed for government purpose without using naked flames was used. Otherwise his practice has been going on since the regime of Mughal emperor Jahangir. She won an award at the hands of Dr APJ Abdul Kalam in the Ignite 2009 award function organised by NIF.

Mechanical porter: Masha observed the problems women and old people face while moving luggage or any other heavy object at home from one place to the other. Hence she developed this small mechanical porter where luggage can be loaded and it can be then raised to the required height using a jack like mechanism by hand or foot. Masha also got an award for this porter in Ignite 2010 competition of NIF.

Masha has been rewarded by the various international and prestigious institutions. So far she received 2 international awards, (World Toilet Organization, Singapore and Anna university, Chennai) and 5 national awards which includes the awards at 97th Indian Science Congress, National Innovation Foundation and National Council for Education Research and Training. Besides this, Viswesariaya Industrial and Technological Museum Bangalore awarded her the Southern India Award where as the Science City Chennai has given the state award for Tamil Nadu. Masha was also short listed for the prestigious TR35 young innovator award by the Technology Review Magazine, the world’s oldest science magazine of the MIT, USA.

Masha has made presentations of her innovations in several institutes including Indian Institute of Space Science and Technology, Trivandrum and Indian Institute of Science, Bangalore where she received National Science Research Fellowship. She was also awarded KVPY research fellowship. She claims to have travelled more than 62000 kilometers across the length and breadth of the country and met over 11 lakh people for the cause of promotion of science. She has also visited Japan as a guest invitee of the Government of Japan (deputed by the ministry of HRD/ Government of India) and UAE as an invitee of the Indian residents in Dubai.

Masha values a lot the love and support given by everyone. She acknowledges the moral and financial support provided to her by various institutions and officials, which she considers as a great facilitator for her growth.  She specially remembers the encouraging words of the Chief Election Commissioner Dr. Quraishi during the one hour presentation on the flameless seal maker at the Election Commission, “You take up the task of manufacturing and supply of seal Maker to Election Commission of your own and become the youngest inventor cum entrepreneur of India. The Election Commission will provide all help including arranging loans from Banks.”

Young Masha aspires for a research career in engineering. Besides, she aims to continue the development of useful and unique products and wishes to become an entrepreneur one day.