Delivery Period : 4 Month from the time of ordering 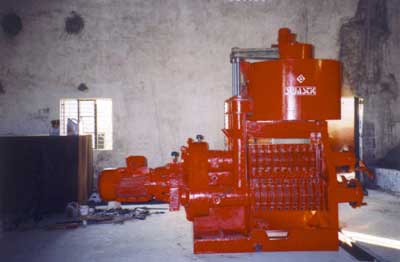 He is Managing Director of Swastik Enterprise, though only SSC passed, has learned by experimentation and development on his own. He has received Sarabhai award from Gujarat Government. GIAN has mobilised a grant from TePP programme to improvise his technology. The Swastik Oil Expeller machine is three times faster, consumes just 2/3 of the power and is half of the size of the conventional oil expeller. It runs on 30 hp flange-mounted electric motor and crushes 18 mt to 28 mt oil seeds per day. Instead of the conventional six labourers, only three are required to operate the machine. It provides oil millers the highest efficiency in a compact shape.

The motor transmits power to the crusher using planetary gear system, which provides high torque and average speed thus increasing the efficiency and reducing the transmission losses by 200%. This oil expeller is designed to be able to crush all kind of oil seeds, including even cottonseeds, which are acknowledged as one of the most difficult type of seeds to crush. The energy efficiency of this machine is at least three times that of any other oil expeller existing in Indian and international markets. Moreover, this machine occupies just one-third the space occupied by any other oil expeller.

The maintenance expenditure required on this machine is also much less that that required for other oil expellers. It has three integrated crushers with a total crushing capacity of 18 Mt/day of cottonseeds and 28MT/day of groundnut and other seeds. The 30 HP motor that powers the machine is an integral part of the main body of the machine. The motor is linked with the three crushers using a three-stage planetary gear system. The presence of planetary gear systems increases the efficiency of utilization of the power generated by the machine. It receives the feed through the conventional hopper. The seeds received through the hopper are steamed in chambers.

The machine has three parallel chambers for steaming the seeds. Each chamber leads to a separate crusher. The chambers have been designed in such a way that seeds get steam from all the angles. Pressing machines follow the steam chambers - one pressing machine connected to each steaming chamber. The pressing machines push into the crusher ensuring that the seeds are not pushed back. The pressing also ensures maximum supply to the crusher by compacting the seeds. The seeds ate then crushed in a screw press. The design by compacting the seeds. The seeds are then crushed in a screw press. The design of the screw press crushing is such that it allows maximum space for the oil to come out. The length of the machine is 3055 mm, width is 1045mm and height is 2145mm. Alloy steel has been used for manufacturing the machine to increase its life span.

Conventional oil expellers are driven by 30HP foot mounted electric motor using sheave and belt technology for crushing 6 to 10 MT of oil seeds per day. The average space requirement of these machines is 9.2m X 3.8m and they require two laborers to manage it. Also sheave and belt technology causes transmission losses further adding to operational costs. These machines need mounting on a concrete foundation to absorb the vibrations caused by the belt. In addition, Wear and tear is high because of the vibrations and presence of accessories such as belt and counter shaft. There is no mechanism to adjust thickness of the cake when the machine is in operation and neither to remove debris. It is difficult to maintain the oil percentage in the cake between the optimum values of 6-7%.

Innovators Oil expeller can crush all kinds of seeds using planetary gear system coupled with screw press. On an average, it saves power by 40 per cent when compared to the conventional oil expellers of the same capacity. It has higher production efficiency, which has been achieved by providing an improved and energy efficient transmission mechanism in a very compact design. Occupying just a third of the space of a conventional expeller, this machine is low on maintenance too. Energy conservation by this invention could lead to substantial reduction in the electricity requirement by the oil mills. As one KW/h saved at the users end could mean a relief of 2 - 4 Kwh of generation capacity. We can imagine that 50 % saving by this technology offers least cost option for bridging the ever-widening gap between demand and supply of energy.