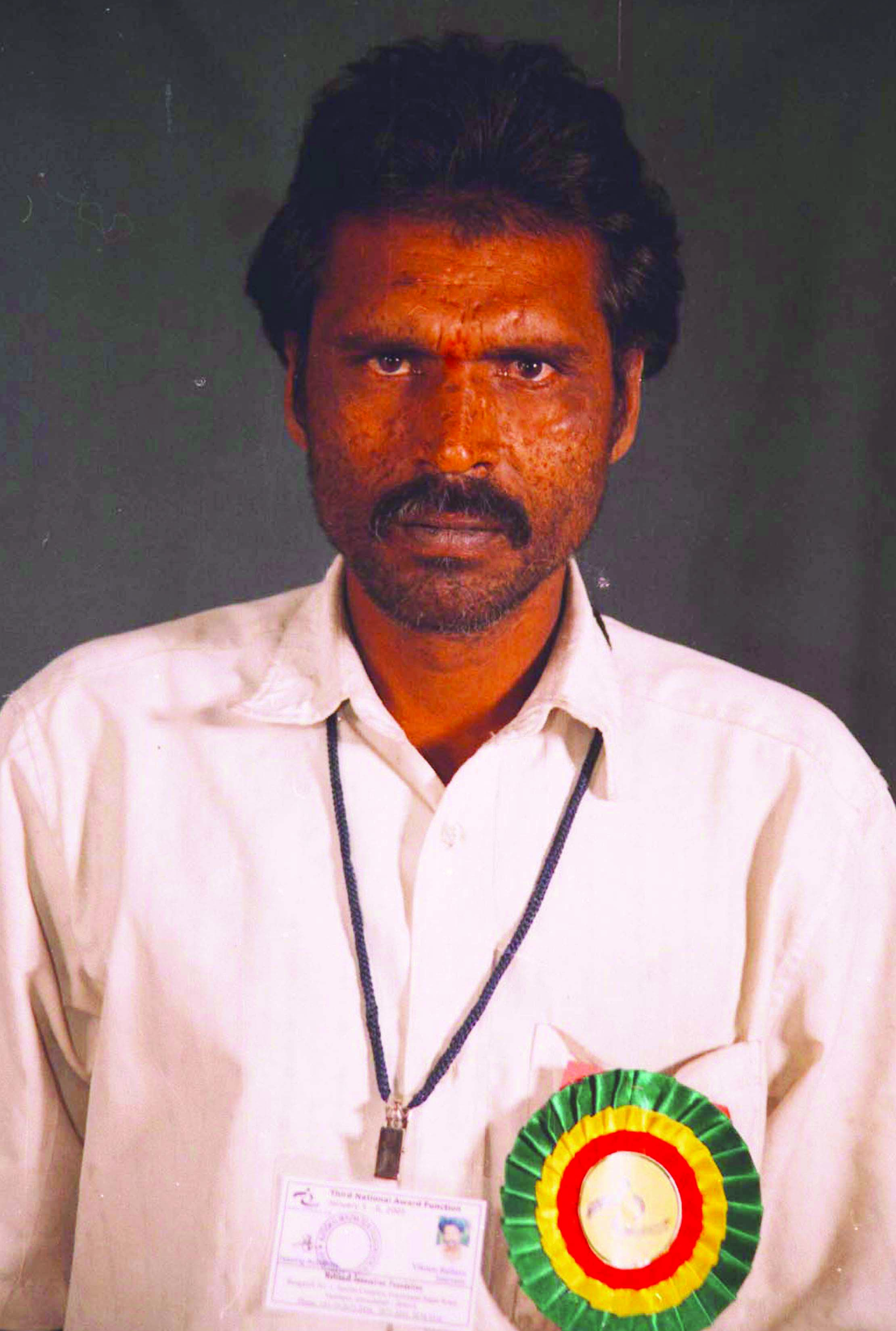 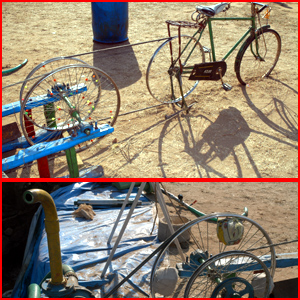 Vikram Rathore (38) is a small tribal farmer from Narsapur village, Utnoor Mandal, Adilabad in Andhra Pradesh. He belongs to the Banjara community which is a semi-nomadic community which migrated from Rajasthan several hundred years ago. He earns his livelihood by repairing cycles and other small machinery. He studied up to the 5th standard and then discontinued his studies due to financial constraints. He had no children from his first wife and so married again and now has five children.
Genesis Vikram Rathore has four acres of land on which he cultivates cotton. Some years ago he had grown paddy in one acre which started wilting because of the lack of rain. But he did not have either an electric motor or diesel engine for pumping water. So he asked his brother for his electrical motor to supply water to his crops but his brother refused to give it to him.
Since childhood, Vikram Rathore has been repairing punctures and dreaming about different products and he put this technical bent of mind to good use to overcome this obstacle. He observed the mechanism of lifting water using an electrical motor in which one engine rotates the fan which enables lifting of water. This gave him the idea of rotating the fan manually to see whether water would come up or not. He tried it and saw that some water was coming up. Then he rotated the fan fast and observed that water was coming up with greater pressure. Then he thought of using a cycle to pump the water, but he had no cycle. At that time, his financial condition was so strained that he had to sell the jowar in his house which had been stored for food and buy an old cycle. He had seen some old gears lying in the compound of an oil mill and he requested the owner to give him these gears and bought some other parts from a waste shop. He also bought a one HP motor and then started working on his pump. He attached his bicycle’s rear rim to the fan with a rope and rotated the bicycles rings fast and was able to pump a good amount of water from a stream to irrigate the paddy.
Advantages
The conventional centrifugal pump needs either electricity or diesel engine, but the present innovation works on pedaling. This is a non-polluting and environment friendly device. Since it is made of commonly available materials and costs Rs.3000 it is affordable to common people. It requires less maintenance and minimum input energy is required to get the maximum output of water. This device can be transported easily from one place to another. The system can also be used in a flour mill.
Recognition
Adilabad district, from which Vikram Rathore hails, is a drought prone region with hardly 20” rainfall and that too unevenly distributed. So this device has great relevance in the region and the people in his village started believing him on observing the functioning of the device. At about that time the ITDA project officer of Utnoor got to know about this innovation and on seeing a demonstration of this pump, he was very impressed. ITDA supported Vikram financially to improve his design and with this support he bought some more cycle rings and designed a new model with which he was able to lift the same amount of water which a 3HP electrical motor could lift.A bitter experience…but undeterred
His innovation had attracted a lot of attention and some years ago, a few people came from Hyderabad promising him a big reward. They took him with them and kept him in a house for six –seven days and did not even feed him properly. He somehow managed to escape and came back to his village. Meanwhile somebody advised him to file a patent for his pump before doing anything further. He went to the collector Mr. Sukumar who wrote to the higher authorities in Hyderabad to help him with patenting but unfortunately nothing happened. The innovation that he has made somehow remained localized and did not diffuse despite tremendous interest among the people because he was not sure whether he would get credit unless he got the patenting done. NIF has now filed a patent for the innovation (371/CHE/2004, 23.04.04).

The various obstacles he faced did not deter him from pursuing his spirit of innovation. He has subsequently developed a manual flour mill which is operated through cycle pedal rotation. The flour mill does not require power or any other resources. It is efficient and grinds one kilogram of grains into powder in approximately five-six minutes. A man of great imagination and determination, currently he has got an idea to generate electricity using a cycle and promises that if he is given financial support, he could generate sufficient electrical power to supply to his whole village. An admirable example of the innovative spirit that flourishes in the remote rural regions where one person’s creativity can become the basis for improving livelihood and generating jobs. This is a centrifugal water pump which is run by rotating the pedal of a cycle. The system comprises a bicycle, rim, beltpulley, impeller and inlet and delivery pipes. A bare rim replaces the rear wheel of the bicycle. The rim is connected to another pulley with a smaller diameter. The supporting shaft of the smaller pulley carries another rim for second stage speed increment. The shaft also carries a flywheel to increase momentum of the system. The final supporting shaft is connected with an impeller that rotates at high speed and pumps water. The power (energy) generated through this process of pedaling is used to lift the water and push the water from a pipe into the farm for cultivation. This innovation is useful for pumping water from rivers, ponds, wells and similar water sources thus enabling poor farmers for pumping water for irrigation and cultivation.