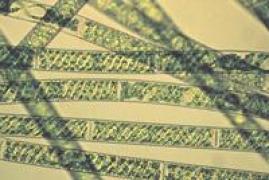 Popatbhai Jambucha (42) is a native of Mathavada village in Bhavnagar in Gujarat. He is an assistant teacher of agriculture at Lokshala (secondary school), Kalasar. He takes up experiments in agriculture at his school and implements those which are successful on his own farms, though he has no formal training in agriculture. He is married and has two sons who are in school. His monthly income is Rs.11,000.
Field trials
To know the effect of this water extract of marine green algae on leaf curl disease, field trials were conducted by Sadbhav SRISTI Sansodhan Laboratory in Khodiyar village near Sarkhej Gandhinagar highway Ahmedabad. The filtrate was sprayed in the morning hours at 2.5 litres/ 10litres of water in three replications with hand operated knapsack sprayer using a recommended spray volume on both brinjal and chilli. The effect was observed in the field at different time intervals. Approximately 30% and 35% control of leaf curl disease was observed in brinjal and chilli respectively. Thus this method is low cost and partly useful for control of leaf curl disease in chilli. Trials with higher concentration are planned to improve efficiency.
An interest in farming
Popatbhai owns six bighas of land on which he grows millet (Bajri) hybrid variety, Jowar, cotton, lady’s finger, cluster bean, cowpea, spinach, cabbage and gourd. In his farm there are 100 mango trees and 15 custard apple trees. Popatbhai inherited his interest in farming from his father whose occupation was farming and animal husbandry. His father also took up many experiments in farming and used to grow crops which were not traditionally cultivated in that area. His father initiated the cultivation of onion and lemon in that area as far back as 40 years ago. Popatbhai carries on the tradition.
Method of preparation

Popatbhai uses marine algae for control of leaf curl disease in brinjal. According to him, the spirogyra obtained from the sea is dried, preserved and used when required. When required, a mixture of two kilograms of dried spirogyra,three kilograms of woodburnt ash, five litres of cow urine and forty litres of water are kept in a drum for 12 hours. The mixture is then filtered through muslin cloth and sprayed on the affected crop with the help of pressure sprayer pump. Time of spraying is in the morning and evening. Spraying is taken up at an interval of 10 days for as long as the crop is in the field. By spraying this, 30% leaf curl disease can be controlled. Spraying also results in better plant growth, colour and it helps to control the growth of aphids and cures withering of flowers. Better productivity can also be achieved by using the method. This method is successful in chilly plants also. Popatbhai got the idea for this practice in 1986-87 on the basis of knowledge he had collected from various sources and on experimenting with it he found it successful. He has also initiated this experiment on a small plot of land in his school for experimental and display purposes.