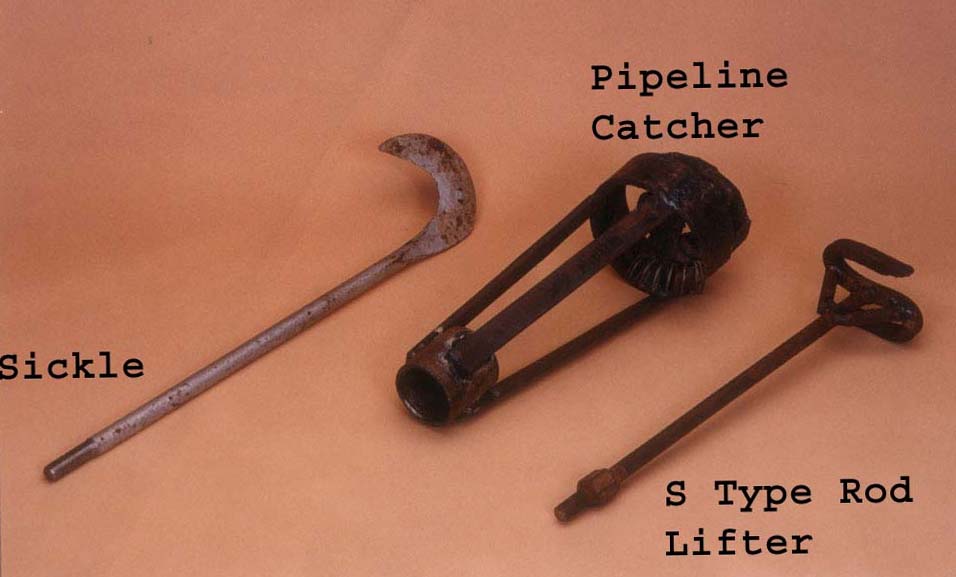 Mr. Gamanbhai Patel continued Mr. Kamble’s good work by improvising these tools. Gamanbhai is a Naika adivasi and originally hails from Ghonas Velgaon - Mahuwa Taluka in Surat district.Once a hand pump fitted on a two hundred fifty feet deep bore well in village Randha in Akole taluka Ahmednagar distict stopped working because the entire pipeline rod assembly had fallen inside. He saw this hand pump while training a rural youth. The dropped pipeline had a check nut on the rod. He started thinking of having a tool, which would catch hold of the rod with the check nut on it. First, he tried using the Hook shaped tool but in vain. He tried again using a reverse S shaped tool but that also did not work because the anticlockwise rotating action of the tool, dismantled the rod assembly inside the bore well. This led him to design the S type fishing tool, which has the facility to attach rods and side support to keep the lifter straight inside the borehole. It could be used to fish out the dropped raiser pipeline and connecting rod when the rod with check nut is above the raiser pipeline. "S" type rod lifter: It is used when part of the pipeline along with the connecting rod drops inside the bore well and the rod with check nut is above the pipe. A 12 mm round bar with a check nut at the top is welded to the center of 'S' shaped 12mm square bar. The ends of square bar have slant cuts to guide the detached rod to the tool. The two pieces of bar are welded to join 'S' shaped square bar & vertical round bar. Required no. Of pipes are added to 'S' shaped rod lifter & lowered into the bore till it touches the fallen rod. Then the rod is fitted in the vice at 9" above the pedestal level. The vice is moved so that it goes 9" deep. Then it is rotated clockwise with the help of vice 6-7 times. The vice is pulled 9" up, thus trapping the raised rod. It indicates that the detached rod in the bore is caught in the 'S' type rod lifer. Pipelines are placed one each on both sides of the rod below the vice & the rod is pulled up with a jerk. Note: This innovation was developed by Mr. Gamanbhai Patel and taken up further by Mr. Vinayak Kamble …hence is listed separately…but the award would be jointly given to both, as without one the other could not have been developed.