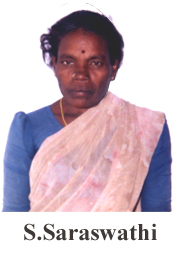 This is a widespread community knowledge practiced by many farmers in Perambalur Taluka of Perambalur District, Tamil Nadu. Smt. Saraswathi, leader of a local Self help group in Senjeri Village has been chosen by the village community to represent it at the award function. Smt. Saraswathi (39 years), studied up to eighth standard. She belongs to the Dalit community. Her husband Subramanian is a repatriate from Sri Lanka. She also works as an agricultural labourer on others fields when there is not enough work at her farm. The villagers in these areas are conserving `vadhanarayana' (Delonix elata) trees and wild moringa trees( Moringa sp.) on the field bunds as hedge crop and also in common lands. This year due to low rainfall, she raised paddy one third of an acre by giving the seed treatment as described. She has a son working in a local NGO. She owns two acres (0.8 ha) land (1 acre wet land and 1 acre dry land). She has been practicing this paddy seed treatment for the last 10 years. She has been instrumental in promoting organic farming through her self-help group with the help of local NGO-`CROP'. She practices organic farming and other practices such as green manuring with Vadhanarayana leaves and leaves of `peimurungai' (wild variety of Moringa sp.). She prepares other herbal recipes also for protecting crops. Paddy seeds (30 kg) are soaked in water in a vessel or drum for 18 hours, and then transferred into a gunny bag, that has been bottom layered with one kg each of `vadhanarayana' (Delonix elata) and `kuppaimeni' (Acalypha indica). Above this layer cow dung cakes are to be placed and then filled with paddy seeds (soaked already in water). This has to be filled to three-fourth of the sack four and cow dung cakes are placed over the seeds. Finally once again leaves of `vadhanarayana' and `kuppaimeni' are to be placed over the cow dung cake. Then the sack has to be tied with rope and stones are placed above the gunny bag to keep it processed, for 24 hours. Then the sprouted seeds are taken out and sown for raising in paddy nursery. In this method the seedlings grow very fast and became resistant to disease like `sengarai' (red spot disease). The seedlings after planting will also have more number of grains. Up to 300 seeds have been recorded per plant compared to 145 seeds in untreated white ponni variety.