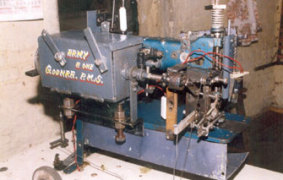 Anil Rashmikant Kamdar (42) hails from Godhra, Gujarat. He has two sons who are studying in a district school. The family lives in a dilapidated rented house. Sharda, his wife, has been both his critic and confidanté and he would often call her to see his small feats during the making of the machine. After initial skepticism, she gradually gained confidence in his abilities and fervently hoped that his efforts would bear fruit. On many occasions, Sharda had helped him in his work, lifting machine parts, when he was unable to handle them alone.