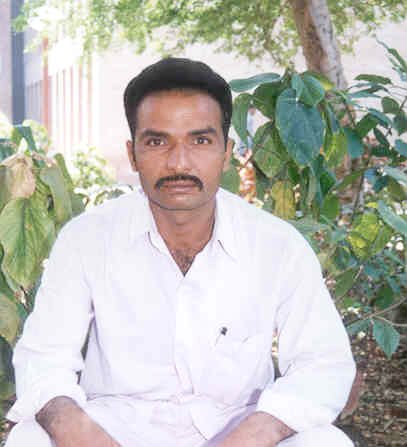 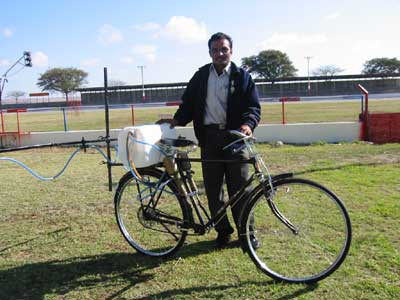 Mansukhbhai Jagani (40) the farmer cum artisan with a passion for mechanical innovations hails from Mota Devaliya village in Amreli district, Gujarat. He is the principal breadwinner of his family consisting of his wife, three daughters and a son. He was born in a middle-class farmer’s family. The eldest among four brothers, he went to school only up to the primary level and then due to the weak financial condition, joined his father in agricultural work. He later ventured outside and worked in a diamond-cutting-and-polishing factory in Surat for some time. He also worked as a farm labourer in various places when there was no work in the diamond-polishing industries. But not satisfied with this work, he then returned to his village and got informal training for about a year in iron welding and fabrication works. Then he started a small repairing and fabrication workshop in his own village and for the last 22 years, he has been running this workshop. He provides services to the villagers for repairing diesel engines, farm implements and also manufactures and sells various farm implements like harrow, plough, seed drill, and grills for doors and windows.
Genesis
Aware of the problem faced in the spraying of agrochemicals in the field, Jagani, decided to develop a sprayer which is efficient and affordable by the farmers. He decided to mount the sprayer on a bicycle, which can be found in every household.
He took a conventional bicycle and changed the position of the central sprocket to rear wheel and rear to central sprocket. At the central sprocket, he also replaced the pedals and attached piston rods, connected with the mechanical brass cylinder pumps on either side. He put a 30 litre PVC storage tank on the carrier which serves as an input to the cylinder and also attached a four feet long spray boom with nozzle along with accessories for adjustment to either side of the bicycle carrier. After working hard for eight days, he succeeded in developing the innovative bicycle operated sprayer. He later made another prototype in which he put two tanks of 20 litres each on either side of the bicycle for ease of balancing. He has sold three units till date.
This portable spraying system is an assembly of a modified sprocket-pump assembly, tank and adjustable sprayer boom can be mounted on any bicycle available in the market. A drum containing the solution is firmly attached to the frame of the bicycle. The reciprocating pistons are connected to the sprocket with linkage mechanism. A number of spraying nozzles are connected to a manifold and their direction and height are adjustable according to requirements. The arm containing the nozzle holding manifold can be folded back while not in use. The driving sprocket and driven sprocket are interchanged from their usual position in a conventional bicycle. The bigger sprocket is fitted to the wheel hub and the smaller sprocket is the driven one. While pulling along the bicycle, the forward and backward movement of the bicycle through the chain and modified sprocket arrangement is transferred to a pump assembly which pumps air into the tank to generate pressure for spraying through the sprayer boom nozzles. The flow of the liquid from the tank to the spray boom and vice versa can be adjusted with the help of control valve. Both portability and drive are provided by parts of the bicycle.
Advantage
This sprayer is energy-efficient and easier to operate and maintain. As it is a flexible product with adjustable height and width of spraying boom there is greater flexibility for using it for various crops. Since the bicycle requires less space to move, it can be used in a more versatile manner as compared to power sprayers that are mounted on tractors. A labour saving device, it can be used to spray one acre of land in 45 minutes thus covering more area compared to manual spraying. It is easy to assemble and dissemble. It serves the dual use of sprayer cum bicycle. It costs Rs.2200 (excluding the bicycle).
Relevance and Potential…
The knapsack sprayers generally used by farmers involve continuous pumping by one hand while holding the sprayer with the other. The whole process of spraying is very tiresome and also leads to hand, back and neck pains with prolonged use for any scale of operation with heavy backload. Also this device requires a lot of time to cover the bigger spraying operations which increases cost for spraying as well as the hazard of pesticide mist getting into the eyes. Manual labour has also become scarce due to the migration of farm labourers towards cities. Other options like two-wheel mounted and tractor mounted sprayers, are too expensive and not of much use in small holdings.
A series of innovations…
Motorcycle driven multi-purpose farming device (Bullet Santi)
In 1994, Mansukhbhai Jagani, developed an attachment for a motorbike to get a multi-purpose tool bar. It which addresses the twin problems of farmers in Saurashtra namely paucity of labourers and shortage of bullocks. This motor cycle driven plough (Bullet Santi) can be used to carry out various farming operations like furrow opening, sowing, inter-culturing and spraying operations. Mansukhbhai’s intermediate-technology contraption proved efficient and cost-effective for small-sized farms. It could plough one acre (0.4 ha) of land in less than half an hour on just two litres of diesel oil. Using motorbike-santi, the cost of weeding a typical field was found to be just Rs 8/ha because as much as 10 ha land could be covered in a single day.
A seed-cum fertiliser dibbler
Jagani has also developed a seed-cum fertiliser dibbler. This device enables more efficient sowing, faster and cheaper than other options available. This equipment is helpful in both sowing the seeds and fertilisation of the crops which require fertilisers to be impregnated in the ground, near their roots. Wastage of seeds and fertilisers is prevented. Due to uniform sowing the germination percentage is also increased.
Recognition for rural talent…

Mansukhbhai Jagani bagged the second prize in the first annual competition for honouring grassroots technological innovations conducted by the National Innovation Foundation in the year 2000 for his Bullet Santi. This innovation was also displayed at the Indian Science Congress, 2000 at Pune as well as at the Swadeshi Vigyan Mela at IIT, Delhi. He also got the opportunity to display his innovation in South Africa in an exhibition organized by the Department of Small, Medium & Micro Enterprises (SMME) of the Northern Provinces jointly with Commonwealth Science Council (CSC), London, on June 2002 with the help of SRISTI and NIF. At the exhibition, he had occasion to demonstrate to a distinguished audience the retrofitting of a two-wheeler with a pesticide sprayer. Since only bicycles are available with Northern Province farmers and not motorbikes, Mansukhbhai mounted the sprayer on a bicycle on the spot. The knowledge and skill of this rural genius impressed everyone present. In fact, Mansukhbhai’s motorbike-polycultivator is considered a typical example of a product with global applications. With design inputs from NID, Ahmedabad, help in patent-application-filing from Boston based THT, law firm and business-plan development by Sloan School of Management of Massachusetts Institute of Technology, the innovation has literally gone places. NIF has sanctioned him Rs.20, 000 from the Micro Venture Innovation Fund for pilot production and test marketing of the Bicycle sprayer.

To find out the way, Mansukhbhai Jagani, a farmer cum artisan with a passion for mechanical innovation developed a bicycle operated sprayer, which is very efficient and affordable by the farmers. It is an attachment, which essentially uses the circular motions of the cycle sprocket to move the piston of the spray pump which generates pressure to spray the pesticides. The front and rear sprockets of a thrown away bicycle are interchanged and the small sprocket is connected to the piston pump, so as the circular motion is converted to reciprocating motion of the piston and thus the pressure is generated and thus the pesticides are sprayed on the field.
Spraying of Agrochemicals in the field is a tedious and laborious task. The conventional knapsack sprayers available in the market are require manual labor to operate, which is difficult to find due to movement of farm laborers toward cities. The small farmers cannot afford to buy the power operated sprayer or tractor-mounted sprayers available in the market, as these are very costly and are of not much use to small farmers due to small land holdings.