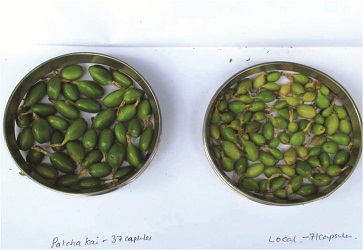 Ramiah (70) has developed an improved drought tolerant and high yielding cardamom variety with exceptionally green and bold capsules. His son Murugan has been propagating the same. Ramaih has eleven acres of plantation estate near his place, which is a hamlet in Megamalai hills of Western Ghats. The place is an ideal location for cardamom cultivation with elevation ranging between 750 - 1200 meters above mean sea level. Most of the inhabitants are marginal cardamom and coffee farmers. The Malabar variety of cardamom is predominantly cultivated in this area. Ramiah, who has studied upto class fifth, belongs to a scheduled caste. He developed the improved cardamom variety with the help of his son Murugan, who maintains the estate now.

Development of the variety

In 1986 Ramaiah wanted to establish a cardamom plantation in his three acres of land and started by growing local Malabar variety in a limited area. After few years he started harvesting cardamom pods from his garden. He and his son Murugan observed that a few plants had large sized pods with bright green color. He then expanded his plantation using the seeds from the newly identified clump. He observed parameters such as growth rate of the plant, disease resistance and yield, and found that they were superior as compared to other local varieties such as ‘Nallajni’ and ‘Malabar’. Also the green colour of capsule did not fade out even after a year. The family members called it Pachakkai (green coloured capsule). Later they purchased land and extended the plantation to over another 8 acres by planting with seedlings raised from seeds of this clump of Pachakkai. Ramaiah digs pits of 2 ½’ x 2 ½’ x 2’ size and fills with top soil, compost and lime after mixing them together before planting the cardamom seedlings. He manures the seedlings once in a year during the rainy season by using neem seed powder and compost. The plants come to yield about two and a half year onwards and maximum yield starts third or fourth year onwards. The Improved Cardamom Variety This is a high yielding (2000kg/ha (dry)) variety with exceptionally bright green coloured bold capsules, which have more seeds than other varieties. This variety is also drought tolerant and most suitable for lower elevation areas of Tamil Nadu. Owing to the color and bold capsules this variety is much sought after by the traders. It fetches a premium price of Rs 100-150 per kg over the normal cardamom price. The Spices Board has recorded the salient features of this improved cardamom variety. and awarded him a shield for best performing cardamom planter in the region in 1999. Over the last 8 years, many neighboring farmers have gradually adopted this new variety. Many farmers from Kerala and Karnataka have also obtained seeds material from him.