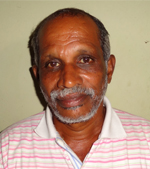 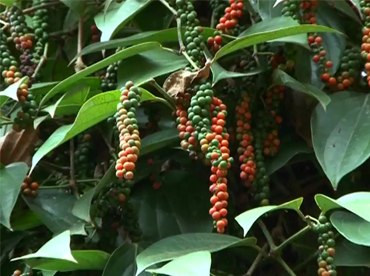 Farmer P.G George (63) has developed an improved variety of black pepper called Zion Mundi, which gives high yield even under shade conditions and is resistant to foot rot disease.

Originally hailing from Kottayam, George could only study upto class 8th due to the lack of educational facilities in his locality and financial constraints of his family. Land for agriculture was a problem not only for him but also for his tribal community. They had to protest against the government demanding land entitlement for which teenager George was jailed briefly as well. His early life was a continuous struggle for survival. In late 1970s, he migrated to Idukki district after his marriage. With some money the couple had saved, George purchased an acre and a half land from community members and started preparing the land for agriculture.

He started planting cash crops such as rubber, black pepper, coffee, areca nut and coconut trees. Following conventional methods, George used chemical pesticides and fertilizers to get more earning from his farm. Overtime agricultural expenses started getting high while the yield started declining. The situation further got aggravated due to natural calamities. This led him to explore new avenues of farming to improve his condition. Gradually he adopted organic and natural methods, which have made him a successful farmer today. He lives with his wife, and their four children and their families. All of them stay together so that the farming activities can be very well taken care of.

Black pepper is one of the major crops cultivated as an intercrop by George. He has grown several local and released varieties of black pepper. However, the yield has been an issue due to the shady conditions at his farm. Moreover, he lost a number of crops to heavy monsoon and outbreak of foot-rot disease in 1985-86 and 1990. This made George to think about developing a black pepper variety, which gives high yield even in shade cultivation and which can resist the foot rot disease.

George noticed that two varieties viz. Thottamudi and Neelamundi could survive in the conditions. Thottamundi, also known as Arayakkodi is one of the major varieties being cultivated by the tribal groups in the locality. While Thottamundi was disease resistant, its yield was low. On the other hand, Neelamundi gave good yield but has poor resistance to diseases. For cross pollination, in 1990, George planted the two varieties together and collected seeds selectively for further propagation. Finally, after several rounds of propagation, he got the Zion Mundi variety in 1998-99. Zion refers to the place where God resides and Mundi has been taken from the name of the mother plant, Neelamundi.

The Zion Mundi black pepper variety is high yielding, resistant to rot and exhibits its high yielding characters even under shade cultivation.

Apart from the high disease resistance, other features of the Zion Mundi variety include big size of the berries, long and uniform sized spikes, high recovery percentage etc. The length of the spikes is longer than the other varieties of black pepper. This variety gives high yield in the mixed crop plantation being cultivated organically. The flowering of Zion Mundi occurs after one year of propagation giving long spikes of 15-20 cm with more fruits (80-100). The recovery percentage is 46% with dry yield of 7 kg from a single vine and 7700 kg from a hectare. The appropriate time for harvesting of Zion Mundi variety is from the end of December to the mid-January. George has sold the variety to more than 500 farmers all over Kerala who have good opinion about the variety. He believes that his innovations should benefit not only him and his family, but also other farmers of his state and elsewhere.

In his farm, he is also growing over 200 types of medicinal plants in addition to all the local varieties of different crops being cultivated by tribal groups. He specialises in mixed cropping system with the integration of all possible natural methods so less external input for farming is required.

Media has widely covered his work. Doordarshan, Jeevan TV, Reporter TV, and Goodness TV, All India Radio, have telecasted programs on Zion Mundi variety and his integrated farm. With a number of awards and recognition to his credit for his contributions to agriculture and organic farming, George continues to experiment in his farm and share the results with fellow farmers.