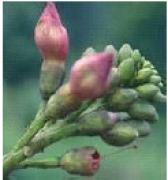 Oroxylum Indicum Vent., a member of family Bignoniaceae is mostly sighted along the river banks or slopes of the hills. Except in the western drier area, the plant is distributed throughout India and South East Asia. The use of this plant for the treatment of various ailments is part of the local tribal communities’ knowledge of various tribes in Manipur such as Anal, Kuki, Mao, Maram, Tanghkul and Zeliangrong.
The medicinal properties of Oroxylum indicum
The decoction of the bark is taken for curing gastric ulcer and a paste made of the bark powder is applied for mouth cancer, scabies and other skin diseases. The seed is ground with fire-soot and the paste applied to the neck for quick relief of tonsil pain. Also, a paste made of the bark is applied to the wounds of animals to kill maggots. Decoction of the bark is given to animals for de-worming. The sword-like fruit or a branch of the plant is used by the farmers to kill crabs in wet paddy fields.
Potential anti-cancer properties
During a botanical exploration tour to Senapati district (1999) which is situated in the northern part of Manipur, Mr.A.A.Mao of the Botanical Survey of India, learned from Maram Naga villagers that a man of about 50 years of age, Pashi Maram had been diagnosed with cancer in 1995. He underwent chemotherapy and radiotherapy for one month and his family was informed that due to the advanced stage of the disease, he would live a maximum of six months more. On the advice of a Tangkhul Naga whom he had met in Imphal, Pashi Maram then took an herbal decoction of the bark of Oroxylum indicum. Surprisingly after coming home, he led a normal life till 2000 with intakes of only pain relief medicines and analgesics along with the herbal medicine. But in January, 2001 he passed away.
The method of preparation

The bark from the trunk, branches, roots etc., of the Oroxylum indicum tree is stripped off and they are dried in the sun for around 2-3 days. After drying, the surface layer is scraped off and a handful of the dried barks/roots are boiled in two to two and a half litres of water for about one and a half hours till the liquid attains a dark red colour. After this the mixture is cooled down and then strained to separate the liquid from the mixture and this liquid is stored in a bottle. One cup of this liquid is then taken three to four times a day. A spoonful of honey is added to the decoction to neutralise its bitter taste.