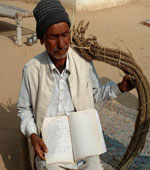 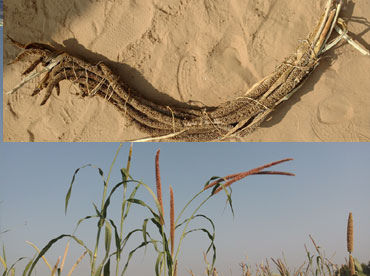 Hanumanaram (62) has been growing this Bajra for the last 40-45 years and conserving the seeds through selection. The Sulkhaniya bajra, named after his village name, is sweet, has very long and compact earheads, high yield, is drought tolerant and has high fodder yield.

Farming is the main occupation of Hanumanram and his family, which comprises his wife and five children. Out of the four hectare land the family owns, Sulkhaniya bajra is cultivated on about two hectares for seeds and rest for his household consumption. Hanumanaram’s forefathers have conserved this variety for the last 250-300 years. The seeds were originally provided by a spiritual guru from Bikaner some 300 years ago to his forefathers. Hanumanaram has been meticulously growing this bajra for the last four-five decades for his consumption and seed conservation. Every year at the time of harvesting, he carefully selects the best earheads for seeds to be grown next year. The grains when separated from the earheads are mixed with neem leaves and can be kept in gunny bags up to 5 years.

It is an early sowing variety sown during the pre-monsoon rains and is suitable for sandy loam soil of the dry and semi-arid climates. The variety is drought tolerant and can withstand long gaps of dry season. The productivity is good even in dry period as compared to commonly cultivated varieties.

The variety is high yielding (20 to 25q/ha) with extra-large earheads with compact seeding. The fodder is sweet and of good quality. The total number of tillers per plant range between 6-10 and the percentage of productive tillers ranged between 90-100%. The crop matures in around 90 days and the total biological yield range is around 40q/ha.

Experts have opined that the innovator’s variety has good potential for increasing productivity in comparison to the other varieties of pearl millet under rain fed conditions. It also possess tolerance to the prevailing disease of pearl millet under field condition. Looking at its performance under arid condition, it holds good promise for the market and it may serves as a basic breeding material for further research and development. In trials at farmers’ fields in Gujarat and Rajasthan, the variety Sulkhaniya bajra was found to be superior as compared to the check varieties and local variety in majority of yield attributing traits.

To obtain feedback of farmers on the performance of improved traditional variety of pearl millet, a meeting was organized in village Sulkhaniya where over forty farmers and experts from KVK and Central Integrated Pest Management Centre were present. The villagers confirmed the claims of innovator Hanumanaram that there has been no change in the quality and characteristics of the variety for the past three decades. High yield, long compact earheads, better fodder quality and drought tolerance are the major characteristics of the variety.

The seeds of the variety have diffused in the periphery of 100-120 kilometers in Churu district as well as in the neighbouring districts of Jhunjhunu, Sikar, Nagor, Bikaner and Jaipur. The response to the variety has been very good and farmers have preferred this variety over hybrids due its high productivity, taste, fodder quality and drought tolerance. The villagers also unanimously agreed that Hanumanaram Jhuriya was the only farmer working on the conservation of this variety for last thirty years and anyone who needed the seeds of this variety, approached him.