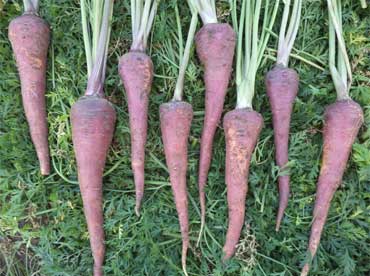 Farming has been the occupation of Vallabhhai for over seven decades. He has 1.6 ha irrigated land and cultivates carrot in an area of about 1.28 ha every year. His two sons help him in farming as well as carrot seed production and marketing. His whole family including his grandchildren helps in various activities of carrot farming and marketing.

Genesis
In 1943 the innovator found that a local variety was exclusively used for fodder. However, he sold it for consumption in the market at a good price. This prompted an idea to develop this local variety for human consumption as it fetched good price in market.

During the early years he selected the best plants for seed production and grew carrot in a small area for domestic consumption as well as for marketing. Later as the demand increased, he started cultivation on large areas during 1950s - 60s. He also started distributing the seeds to other farmers in his village and adjoining areas during 1970s. In 1985, he started selling the seeds to businessmen for distribution at a large scale at the rate of Rs. 100-200/20 kg. He also rented farmers’ fields exclusively for the purpose of seed multiplication. For the last 15 years, he has been cultivating carrot in around 1 ha for vegetable production and 1.33 ha exclusively for seed production.

The carrot variety
This is a long size carrot variety, which has deep red colour and sweet taste. The average yield of this Maduvan Gajar is very high (40 – 50 t/ha) and the maximum yield reaches up to 65t/ha under good management practices.

In field trials at Gujarat, the performance of Madhuvan Gajar at 274.8 q/ha was found to be at par with local checks varieties. Mild incidence of leaf blight disease was observed in the tested variety and forked roots percentage was also less as compared to national check. Biochemical analysis carried out at CALF Lab (National Dairy Development Board, Anand) showed high β-carotene content at 277.75 mg/kg and high iron content at 276.7 mg/kg. The field experiment for performance evaluation are being conducted by Rajasthan Agricultural Research Institute, Jaipur (SKN Agriculture University) during Rabi, 2016. The final report shall be received by end of February, 2017 or early March 2017. In the field experiments at Gujarat and Maharashtra, the variety was found to be good in terms of sweet taste and its carrot production as well as green fodder. The maximum yield 468 q/ha was recorded at the innovator’s field whereas average yield at farmers’ field in Gujarat and Maharashtra was 368 q/ha.