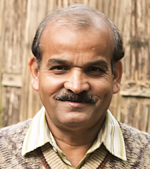 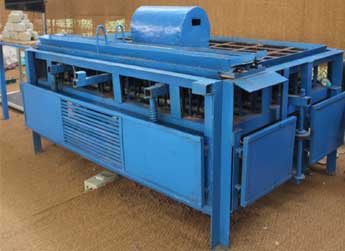 Umesh Chandra (55), an innovator entrepreneur from North Lakhimpur, has developed interlocking bricks and a machine to make the bricks. These bricks facilitate faster and cheaper construction due to the interlocking design, which further reduces consumption of mortar and requirement of skilled labors.

Umesh is one such person whose strong will to own a home despite financial constraints led him to first develop a new kind of interlocking bricks and then a machine for making those bricks. Only class tenth pass, Umesh makes his living by selling stone chips, construction sand, cement etc. Now a considerable part of his total earning comes from selling his innovative product. In his family he has his wife and two sons, who are school students.

To fulfill the aspirations of his family, Umesh decided to build a pucca house. As the work progressed he had to face a lot of difficulties in dealing with the masons. Hiring them was not only expensive but also very erratic as they often went out to look for better paying work even while engaged here. After having a bitter experience of dealing with masons, he started thinking of a way to make brick construction without the help of masons.

The interlocking brick making machine consists of a brick forming mould and a vibration unit mounted on a chassis. The machine can make 44 bricks at a time in a cycle of 20 minutes. Not requiring a hydraulic press, this machine can make normal bricks as well by simply changing the mould. Occupying about 50 cubic feet (4”x5”x2.5”) of space, this machine is a compact unit and weighs about 600 kg. The interlocking brick produced has the same dimension as that of normal brick (2.5” * 4” * 9”).

The machines available in the market are electricity operated and have a cycle of 19 seconds producing 4-8 bricks. These machines cost upward of Rs. 10, 00, 000 while the one of Umesh is less than one – fourth the price. He has made a couple of such machines and sold one of them. He is presently working to reduce the cycle time to improve the per day output.

The use of interlocking bricks has a lot of advantages. Unlike in other brick constructions, there is no bonding of the bricks using mortars except at the base and top of the wall constructed. After reaching the desired height of a wall, a lintel is placed on top of the wall. This not only strengthens the wall but also prevents any possible lateral movement of the interlocked bricks. These self-aligning interlocking bricks enable automated speedy construction, substantial reduction in the consumption of mortar during construction and a huge reduction in labor cost.