Improved varieties of Anthurium and its planting method

Home / Profiles / Improved varieties of Anthurium and its planting method

Improved varieties of Anthurium and its planting method 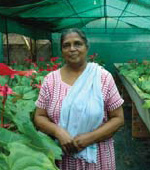 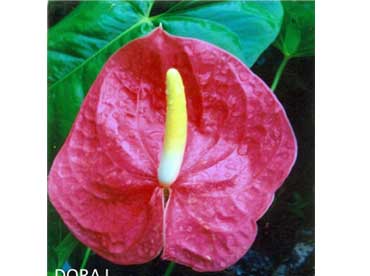 Vasini Bai (64) has developed ten varieties of Anthurium by cross pollination. Large and medium flowers with rare color combination (light and dark orange, magenta, green and rose color combination, dark red and white colors) are uniqueness of these varieties. She has also developed new method for raising the seedlings in limited space using corrugated asbestos sheet and for transplanting grown up seedlings she used concrete troughs instead of pots.

Farming is her main occupation in which she has been involved for more than forty years. She lives with her husband who worked as a draughtsman earlier. Their three children are professionally qualified and settled with their families. Vasini Bai’s father was a farmer and she was inclined towards farming since childhood. She helped her father in all the activities of farming. She got married at the age of 20 and moved to her in laws place, where she started growing vegetables and raising chicken in her farm. Presently, she owns a small piece of land near her house and cultivates Anthurium and many exotic flowers including several types of orchids. She also cultivates pepper, turmeric, banana, various types of vegetables and fruits. She sells the Anthurium flowers and plants to local florists as well as florists from Pune and Mumbai through an agency at an average price of rupees 60-75 per flower.

Genesis
About 35 years ago, in late 1970s her son brought two plants of Anthurium from a friend’s house and she liked the flowers very much and wanted to raise more such plants. She got interested in floriculture and started growing various kinds of flowers in her backyard and farm. She learned through trial and error kept experimenting with various techniques. Her interest in Anthurium kept her motivated for further experiments.

In 1980 she manually cross pollinated for the first time and after years of experiments she developed her first variety of Anthurium- Dora (single plant with 8-10 leaves and multiple flowers i.e. orange colored spathe) in 1985. She continued her work and during 1985–2000 developed another five varieties viz. Dora- I, Dora –II, Dora –III, Dora –IV and Dora – V. The other five varieties Akash, George, Giant Pink, JV Red and JV Pink were developed later through manual cross pollination.

Cultivation method: The seeds are sown in trays over the soaked cotton covered with glass plates. Seedlings are formed in 8-10 days. When the plants are four months old, they are replanted on the beds of corrugated asbestos sheets. The beds are formed by using river sand, chopped dry leaves and small chops of coconut husk. In 12- 15 months the plants begin to flower. Again the plants are replanted in flower pots or in bulky huge RCC molded troughs.

The salient features of all the varieties are large beautiful flowers, different colors of spathe and spandex, long stalks and longer shelf life.

The details of all the ten varieties are as below

Vasini Bai has received a number of awards and recognition for developing these Anthurium varieties. She has provided Dora, George, JV Pink, JV Red for tissue culture at Tropical Botanic Garden and Research Institute, Palode for mass multiplication.

Facilitated by NIF, four hybrids and six parents are being evaluated under the varietal testing programme of TNAU, Coimbatore. Six parents of these four hybrids are looking healthy, vigorous with colourful spathes ranging from light pink, pink, red, white, violet and orange. The leaves are shiny, medium large and heart shaped. The flower spathes are bright coloured and has short spadix. These parameters are comparable with existing commercial varieties. It is expected that the hybrids from these parents will also produce prominent and distinguishable characters of parents, comparable to commercial varieties.