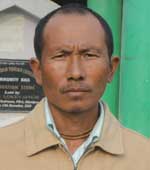 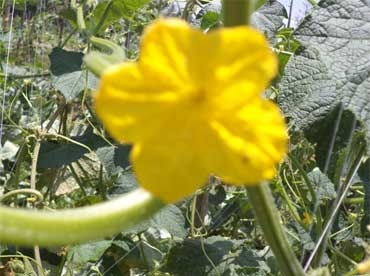 Sapam Lukhoi Singh (43), a farmer from Thoubal, has developed an improved cucumber variety through selection from a local variety Chingjin Thabi. The specific characteristics of the variety are high yield, dark green colour, tolerance to leaf curl and long storage life.

Lukhoi Singh (43) is a school dropout. Being the eldest son and due to financial constraints, he had to start assisting his parents in farming, which he took up as a profession later. He lives with his wife, three children, all of whom are school students, and a differently abled brother. His wife assists him in all the farming activities and marketing of the farm produce in the nearby markets. The main crops grown by him in his field are cucumber, cabbage, pea, potato, pumpkin, french bean, cauliflower, tomato, paddy. The farmer has developed various other crop varieties through selection such as pea, potato, pumpkin, french bean. Now he is recognized as a model farmer in his district.

Genesis
In 2001, Lukhoi Singh sowed the seeds of a local cucumber variety Chingjin Thabi, which was procuredfrom a fellow farmer in Thoubal District. At the time of harvesting he found the matured fruits to be of varying size and colour. Being an innovative farmer he selected the seeds from the biggest fruits which were dark green in colour and sowed them in the next season. The same process was continued every season till 2005.  The desirable characteristics of dark green color and big sized fruits were found to be stable in the year 2006. Subsequently, the seed was distributed to other farmers for cultivation and named as Chingjin Thabi Selection.

The variety
This dark green coloured high yielding variety is suitable for sandy loam soil and sown in March-July. It has tolerance to leaf curl and has long storage life (10-15days). Diseases like yellowish patches, downy mildew and powdery mildew are observed but can be controlled by using fungicides.
In trials, the farmer's variety Chengjin Thabi Selection (25.87t/ha) was found to be good and high yielding next to Alimgir CT 380 (30.63t/ha) a very high yielding variety from Thailand which is grown commonly in Manipur. The longest fruit (24.42cm) was also recorded from Chengjin Thabi Selection. The average number of fruits/plant (17), fruit weight/plant (1.08kg) and yield (25.87t/ha) of the farmer's variety were also found to be higher than the other three check varieties taken up for the trials. The application for registration of the variety has been submitted to PPV&FRA, New Delhi.

Apart from scientists, Lukhoi Singh has given the variety’s seeds to approximately 200 farmers for cultivation purpose. In the villages, farmers normally do not purchase planting materials instead they exchange their planting materials with each other. Many farmers, who have used the seeds were happy with the performance and added that they could earn good income every season.

For his efforts, Lukhoi Singh has been awarded and recognized at many events in Manipur and outside the state. He has also developed other crop varieties through selection such as pea, potato, pumpkin and french bean. The experimental trial for these varieties is ongoing at Central Agricultural University, Imphal, Manipur