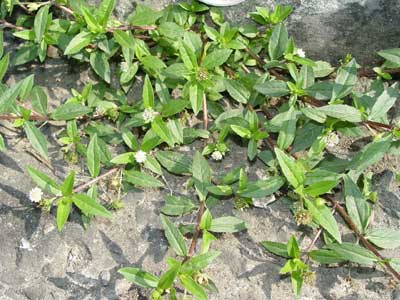 K. Bose (58) hails from Sooranam village, Sivagangai District, Tamil Nadu. He is primarily an agriculturist and in this field he strictly follows the advice provided by the agricultural department. He started reading medical books written in Tamil and learnt a little about medicine in general. What he has learnt he has been sharing with his family, friends and relatives. Later he got in touch with the Covenant Centre for Development, Madurai and started participating in their activities. This improved his knowledge on medical care and medicinal plants and he started to plant a variety of herbs and medicinal plants around the little pond in his property. He is also a member of the Pollachi Azhiaru Vedatri Mahavishi Centre. Through this centre he has learnt simple exercises to overcome diseases. He has shared this with many and helped them to get over their ailments. In addition he also learnt yoga from Prof. Aandiappan and he has observed that yoga can cure diseases.

His youngest daughter was affected by Polio at the age of one and a half years and her two hands and legs got affected. He pursued western medicine, acupuncture and traditional / native medicines continuously for two years and both hands and a leg became fully functional, but one leg could not be put right completely. However today she attends to her affairs without depending on anybody.
Some of his treatments
Dental problems
“Karisalankanni” leaves (Eclipta prostrata) are collected and dried in shade and then some salt is added and a sooranum (powder) is made and if this is used to brush teeth, all dental problems will be taken care of. He cites his example to prove the effectiveness of this method- he is 58 and has been brushing his teeth using this method. His teeth are strong and he can even crush bones. He distributes this “Sooranam” freely to others.
Poisonous bites Sriyanangai (Andrographis paniculata) is picked and dried in the shade and a sooranam (powder) is made. To this pepper powder is added and a capsule is made. This according to him cures poisonous bites.
Diabetes
Murunga (Moringa olifera) leaves are boiled in water and one tumbler of this is taken in the morning on an empty stomach. If this is done for 20 days, the sugar level can be brought under control. He has taught this to many and he quotes a case in which one person managed to bring his sugar level down from 217 mg to 120 mg and has managed to sustain this without any change in food habits.
Asthma
Thoothuvalai, Thulasi (Ocimum tenuiflorum), Kandankathari (Solanum santhocarpum) and a little honey are mixed well and eaten regularly and this cures asthma.
Hair oil “Karisalankanni”, “Maruthani”, “Curry leaves” and “Ponnankanni” are ground together and small pallets are made and dried in the shade for five days. This is then soaked in coconut oil for five days and thereafter the oil is applied in the mornings and evenings. This prevents loss of hair, dandruff and greying of hair.