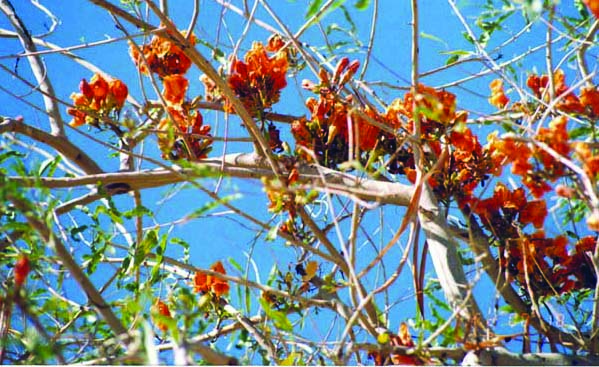 Karimbhai Sumara (58) hails from Veerampur village in Banaskantha district, Gujarat. He currently treats 40 patients per day, some of his patients coming from Rajasthan, Maharastra and Gujarat. Karimbhai’s father was a potter and also an expert in herbal medicine. Karimbhai used to accompany his father on his frequent visits to the jungles to collect clay and on these trips his father imparted valuable knowledge about different herbs to him. Karimbhai recalls how his father would prepare the extracts and mixtures. He used to help his father in grinding, powdering and mixing medicines.

A nature-lover
An ardent advocate of environmental conservation, Karimbhai’s work in this field is three-pronged and includes monitoring the abundance or scarcity of the various herbs vis-? -vis their demand and cultivation of those plants that are becoming scarce as well as those needed in large quantities, educating the youth about the importance of diversity and about ways of utilizing the bounty of Nature without disturbing ecological balance and processing of medicinal plants in such a manner that a stable supply position is maintained and also in a manner, which assures consistent potency of their extracts. In 1999, Karimbhai founded an NGO named Aravalli Vikas Mandal which has been rendering creditable service to the flora and fauna of the ranges. He has also featured in a documentary film commissioned and telecast by the British Broadcasting Corporation (BBC) to honour experts in indigenous knowledge.
Future Plans
Karimbhai has joined with three more herbalists and applied for financial assistance under the Technopreneur Promotion Program (TePP) of the Department of Science and Technology (DST) so that the market potential for his blood-pressure medications can be systematically assessed. He is quite hopeful of getting the needed funding and dreams of the day when the true potential of the herbs of the Aravalli ranges could be realised.
Busy Practitioner
Until three years ago, Karimbhai was a potter and used to take time off from routine chores to collect herbs and to treat patients in the village. But then he became a fulltime practitioner of herbal medicine as he was not able to attend, on a part-time basis, to the swelling rank of patients who required his attention.
Karimbhai often leaves home just after midnight to walk about 15 km in hilly terrain through jungles to pick up the right herbs. The trip takes up to five hours and he is able to start treating his patients as the morning dawns.
He treats a gamut of diseases like heart ailments, arthritis, diabetes, skin disorders, cold and cough, asthma, fractures, genitorurinary- tract infections, intestinal ulcers etc. and even cancer.