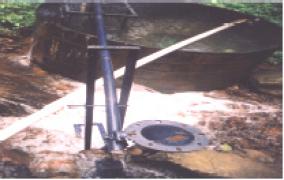 Noushad K.T. (27) is from Kizhupparambu Panchayat, Malappuram district, Kerala. He is a mechanical fitter and supervisor in a re-rolling mill at Kozhikode where he has been working for the past seven years. He enrolled for a part time diploma course in Mechanical Engineering, but due to his exclusive interest in building this device he was unable to do justice to other topics and failed some papers and is planning to attempt them again. His father and a brother are working in the coconut husk business and another brother is a driver.