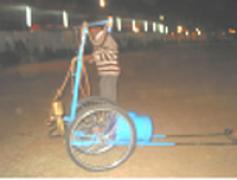 Gopalbhai Surtia (50) is a farmer from Katholi village in Baroda district, Gujarat. He has studied upto the 8th standard. He has about 12 acres of land. He is married and has two sons. His father, Shri Parakram Singh, is a quite renowned singer of Gujarati traditional “Bhajans” and is still actively involved in farming at the age of 75. Gopalbhai’s elder son is also involved in farming while his younger son is a professional singer.
Genesis Gopalbhai has developed an innovative “Hand Driven Sprayer “for spraying pesticides in the cotton crop. Gopalbhai conceived this idea because of the labour shortage and the difficulty he experienced in carrying 15 kg of weight on his back when using the conventional knapsack sprayers. He started working on this idea in 1997 despite opposition from his family members but now everyone is happy with him due to his success. Even neighbouring farmers borrow his pump now.
Value addition on this device has been done by a student of NID (National Institute of Design) under GRIDS (Grassroots Innovation Design Studio). This technology was transferred by GIAN (West) on non exclusive basis to M/s Nilgiri Industries of Ahmedabad with sharing of benefits with Gopalbhai.
Advantages
The barrel for storing pesticides can be customized according to the needs of the user. The nozzle and spray boom can be adjusted as per the requirement of spraying. It costs around Rs. 3500 only. In addition it is extremely easy to maintain and repair. This sprayer can spray one acre of land within 5-6 hours.
Innovative in spirit
Gopalbhai has always been experimenting with new things as part of his daily life. But as his family has often tended to discourage such new experiments, he works mostly in the night when everybody is asleep. His next idea is to make a robotic bullock (Iron Bullock) for agricultural use. He has also got plans to give training to small monkeys to use them in agriculture operations like weeding, inter-culturing etc. According to him, animals are always loyal to human beings and if they are trained properly, the problem of labour shortage could be overcome to some extent.
The sprayer consists of two wheels of a conventional bicycle, piston assembly, iron chassis and spray boom accessories. Two wheels are mounted parallelly at a distance of 2.5 feet on a self-made iron chassis. A small wheel is kept in between in such a way that it would convert the circular motion of the wheels into the reciprocating motion of the pump piston with the help of an eccentric connecting rod. A 20-litre barrel is put on the same chassis. While the unit is pulled manually, due to the motion of the wheels, the small wheel at the middle is rotated. This rotation helps in the reciprocating motion of the piston of the pump. This in turn, generates pressure and the liquid is sprayed through the nozzles fitted on the spray boom.