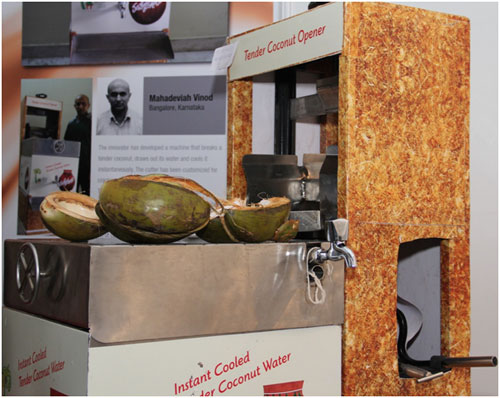 Vinod Mahadeviah from Bangalore, Karnataka drives his business through a shop where he sells coconut-based food products such as chilled coconut water, coconut cream, coconut jelly; coconut ice-cream etc. He has developed a tender coconut breaking and instant coconut water cooling machine. Realizing the dearth of such an offering in the market, he always wanted to possess such a machine that could break a tender coconut, extract its water and cool it instantaneously there by reducing human effort involved in breaking coconuts.

His purpose was to simplify the difficult process of breaking open the coconut. His innovation can break a tender coconut, extract its water and cool it instantaneously. Coconut water passes the cooler through the collecting tray and while passing through ice covered pipes gets cooled by close to 14-15 degree C. In terms of its maximum capacity, the machine can cool about 400 glasses (200 ml) of coconut water.

Tender coconut has the potential to steal the market from the carbonated drinks if made available at appropriate locations. The machine has a customized cutter (using hydraulic power) for cracking the coconut. Once the coconut gets cracked, the coconut water goes into water cooler through the tray, placed under the blades.

It eliminates drudgery involved in cracking/breaking the coconut/toddy/nuts and one can also earn from jelly which is a product developed as a part of the broader process. Current and future application areas like Coconut water cooling, water cooling, juice cooling etc. are poised to benefit from this machine. 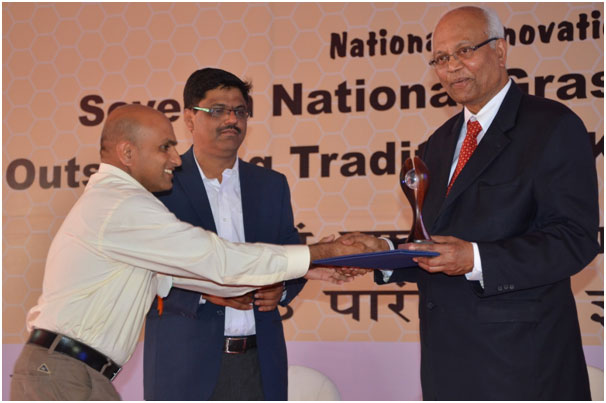 He was conferred with an award during 7thNational Grassroots Innovation Awards.