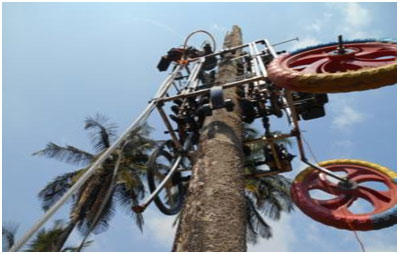 Ganesh Shetty, a grassroots innovator from Chikmagalur, Karnataka undertakes electrical repairing works as his primary occupation. He has developed a remote controlled engine operated areca-nut and coconut tree climber along with a spraying attachment, described as robotic sprayer.

Labour charges for spraying pesticide on areca-nut crop arebetween Rs. 1000 andRs. 1200 per 200 liters of spray. Witnessing his interest in developing science based projects, few friends from farming community approached him and discussed their areca-nut spraying problem and requested development of some solution from him. Following a detailed discussion with friends and post assessment of their requirements, he developed a prototype that could address most of their needs. This was the trigger moment which finally transformed into development of a Robotic Sprayer

Robotic sprayeris an engine operated climber using chain with rubber grippers (like caterpillar legs), which can climb up to a height of 50-70 feet and spray pesticide while climbing up an areca-nut tree. Device runs on a 54cc petrol engine and along with the spraying attachment can climb up to 60 feet in approximate 7 min including set up time of the device.

Device, which has been converted from an earlier electric model to a petrol engine operated model, is being used by many locals. It has great potential in areas where areca-nut, coconut and palm are major growing trees. Machine will not only reduce dependency on labours/workers but also prevent accidents. It can spray liquid pesticides in equal proportions. Its use cases are multiple - can be used for applying pesticides, growth promoters and even applying water for short relief of plants in areca-nut and coconut plantation. 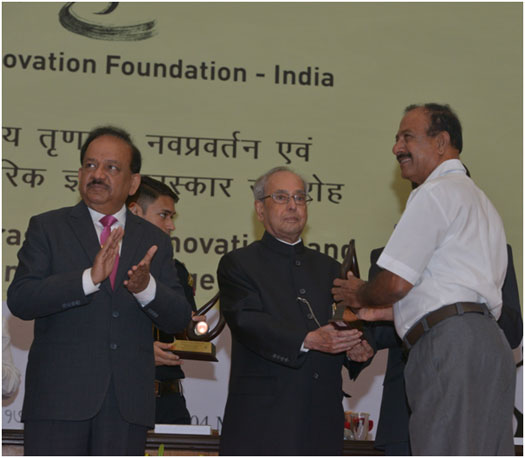 Shri Ganesh Shetty was conferred with an award by Hon’ble President of India on 4th March, 2017 during Ninth National Biennial awards for Grassroots Innovators and Outstanding Traditional Knowledge Holders.