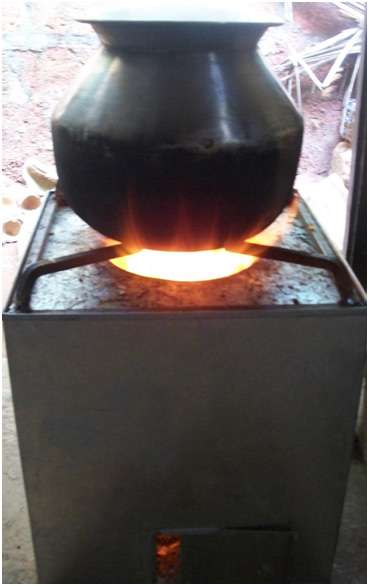 V. Jayaprakash, a chulha maker from Kerala has improvised the portable stove by incorporating a secondary combustion chamber for burning the un-burnt bio mass and hydrocarbons. As a result, thermal efficiency of the stove has improved and pollution has reduced.

Though he had a flair for education, yet due to financial constraints of the family, he couldn’t study beyond SSLC. In Coimbatore, he turned into a daily wage labourer and later in his hometown started a fruits business. During those days, Kerala Shastra Sahitya Parishad (KSSP) was popularizing smokeless chulha and that triggered his inquisitive mind to learn more about it. Consequently, he got in touch with Agency for Non-Conventional Energy and Rural Technology (ANERT) and simultaneously pursued his passion for chulha through constant experimentation. He manufactured a community chulha for a hospital and while inspecting it discovered that combustion at two levels as opposed to one would have been ideal and more efficient for a stove. He was successful in developing a prototype, the underlying principle of which was burning firewood at two levels with complete combustion and without smoke, and it was efficient in comparison with smokeless chulha.

The innovative stove is a double chambered efficient portable stove, used primarily for community cooking. It is made up of bricks, cement, clay, cast iron; use coconut shell or wood as a fuel. Base of bottom chamber is made of iron grill on which the fuel is placed. Below the grill is an air chamber. While the fuel burn, smoke mixed with unburnt hydrocarbons reaches the upper chamber, which is provided with air inlet holes. Complete combustion takes place here and combined heat gets available to cooking vessel above second chamber. Fuel opening is provided at the front of device and can be regulated using shutter, which in turn controls flow of air. Air flowing through the opening during combustion causes an updraft while fuel is burning. This triggers secondary combustion as carbon particles, which were left unburned will now get burnt due to additional air.
Higher efficiency, low cost and portability are significant features of this stove. The combustion efficiency is in the range of 37.67% with wood as fuel and 29.48% when coconut shell is used. It was tested by Integrated Rural Technology Centre, Mandur, Palakkad followed by IIT Guwahati. ANERT observed that this stove when used by a hotel in Calicut caused excellent savings i.e. required only 75 coconut shells costing about Rs. 30 for cooking 40 kg rice as opposed to LPG option, which required 10 kg fuel costing about Rs. 400 for cooking the same quantity of rice.

Now, besides manufacturing the portable wooden stove, he also manufacture and sell smokeless and community chulhas. NIF has supported his innovation in multifarious ways including financial support through Micro Venture Innovation Fund (MVIF). 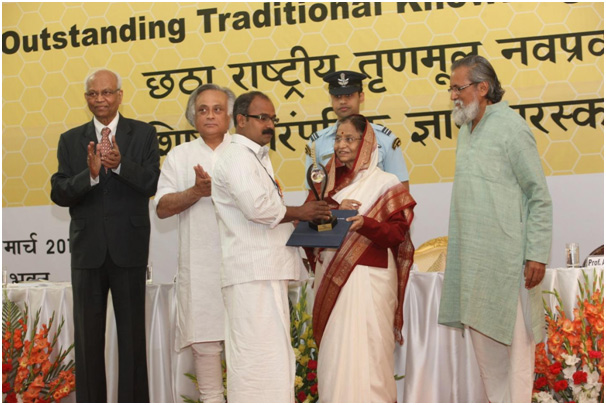 He was conferred with 6th National Grassroots Innovation Award by then Hon’ble President of India Smt Pratibha Devisingh Patil at Rashtrapati Bhawan. He was also presented with Kerala State Energy Conservation Award 2008 in appreciation of his commendable efforts towards energy conservation and management.