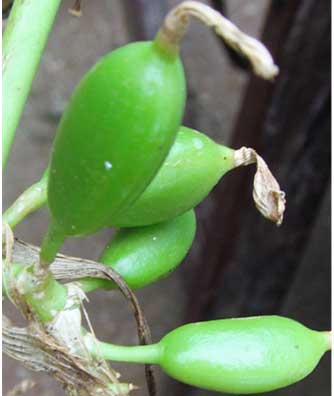 Cardamom (Elettaria cardamomum) plays a pivotal role in Indian cuisine. It is inseparable from sweets due to its unique and pleasant fragrance. An improved cardamom variety known as Pachaikkaiwas developed by Mr. L. Ramaiah from Theni, Tamil Nadu and now is maintained by his son Mr. R. Murugan.The variety is named as 'Pachaikkai' because of its unique bright green coloured capsules. The other unique features of the variety are higher fruiting with remarkably bold capsules containing more seeds as compared to other local varieties. Moreover the variety is tolerant to drought. During 2012 while the area was affected by drought, all the conventional varieties were severely affected but this variety sustained and gave good yield. It helps to fetch more prices over the normal cardamom price.

It took around 19 years of pains taking to develop this variety. During 1986, when the innovator planned to start with cardamom cultivation he bought seeds of the local variety. During harvesting he found few capsules were large sized with bright green colour with excellent growth habit and free from disease. He found that these parameters far exceeded the conventional varieties' traits ('Nallani' and 'Malabar'). Also the green colour of capsule did not fade out even after a year. Many farmers in from surrounding districts and also from Kerala and Karnataka have purchased saplings/cuttings for cultivation.

National Innovation Foundation-India (NIF) facilitated on-site evaluation by Spices Board, Kerala and encouraging results were found which included higher yield with exceptionally green coloured, bold and oblong shaped capsules. In addition, the variety was found to be tolerant towards most of the pest and disease and it is most suitable for lower elevation areas (Tamil Nadu cardamom areas) and capsules have more number of seeds than local varieties. Based on the expert's report and outstanding performance of the variety, it has also been undertaken for a trial in All India Coordinated Research Project (AICRP) on Spices during the year 2016.

He was awarded for the variety being the best performing variety by the spices board, Kerala. During 2013, he was conferred with the National award in 7th National Biennial Competition organized by NIF.