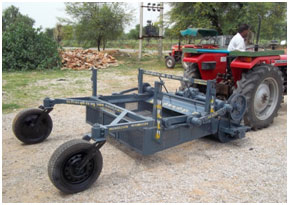 Ratanram Dudhval is a mechanic and runs his own small scale industry named Jay Kishan Krishi Yantra Udyog with his younger brother, and their sons in Rajasthan. He modified the groundnut digger by adding a vibration pad/shock absorber spring and two pivoted wheels to its rear. The key driver was a frequent problem of wear and tear and manoeuvrability of commercial tractor operated groundnut digger especially at the corners. He is engaged in the occupation of manufacturing agricultural machinery like plough, harrow, seed drill, groundnut digger, trolley, chaff cutter, tractor operated bull dozer etc. 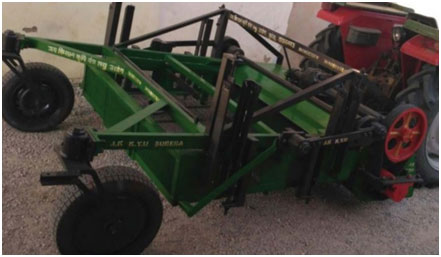 Ratanram had observed the difficulties faced by farmers in getting labourers and also incurring losses due to inefficient digging. He had purchased a groundnut digger in 1998 (manufactured in Elanabad, Punjab) and later another digger manufactured in Ladnu. In both the diggers, he faced frequent wear and tear, and manoeuvrability issues. Since he had been repairing the machines used by other farmers and was aware of the issues due to wear and tear, he modified the groundnut digger and developed two different variants. One variant had a loaded spring at the front of ground nut digger and wheels for supporting the machine. The other one had towed wheels, which help in steering the machine in desired direction along with leather belt as vibration pad.

Modifying the conventional groundnut digger, he added vibration pad/shock absorber spring and two pivoted wheels at the rear. It is supposed to reduce load on the tractor’s three point linkages and increase manoeuvrability due to wheels, reduction in breakages (mainly bearings) due to vibration pad, approach of machine in corners and easy driving on bunds and channels in the field.The machine, which can be fitted to standard 540 rpm PTO, can cover 4 ha in 8 hours, consuming 6 litres diesel. Customers who purchased machine as early as 2011 are still using the machine and the sale is mainly driven by word of mouth, which confirms the acceptability of machine among the farmers.

Ratanram Dudhval was conferred with an award for his “Groundnut nut digger with vibration pads”during 9th National Grassroots Innovation Awards.