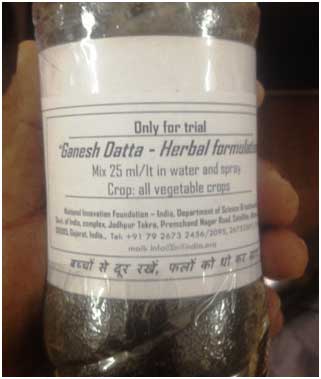 Ganesh Dutta Herbal Formulation is an effective formulation for insect pest control in vegetable and fruit crops. It is developed by a farmer Shri Ganesh Dutt Sharma from Kullu, Himachal Pradesh and is a well-known herbal healer of his area. He lives in remote Hurcha valley and has good knowledge of valuable herbs of Dev bhumi Himachal having many hidden treasures. 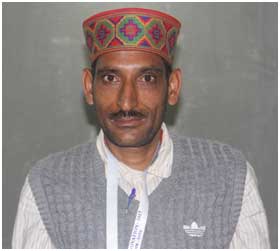 He has developed many formulations for human health and agricultural usage. One of his formulations developed to control insect pests in fruits and vegetable crops was found to be very effective. Previously he worked as a labour in farm and was also involved in preparation of formulations related with human health but in 2009-2010 he had severe mouth infection while using chemical pesticide in his farm. It was a turning point in his life and he decided to dedicate his life for promotion of organic farming. He started making formulation by using different combinations and processing of different herbs of the valley. In 2014, he developed a formulation with water extract of five locally available plants, essential oil of one of the five plants and cow urine. He tested the formulation in his area for insect pests of various fruits and vegetable crops and found effective against an array of insects like Spodoptera, white grub, Helio this, Borers and mealybug. Ganesh Dutta herbal formulation has a shelf life of one year at room temperature and 2.5% of this formulation with water can be used for spraying on various vegetable and fruits crops.

National Innovation Foundation- India (NIF) supported the innovator for evaluation of his formulation in various crops like Okra, Brinjal, Tomato and Gram by conducting research trial on experimental farms and farmers fields. During 2015-2016, a study was performed to check the efficacy of fourteen different herbal preparations and chemical control on Okra. Ganesh Datta herbal formulation was found to be more effective for reduction of insects (90.31%) as compared to chemical and other test formulations.

During 2016-2017, farmers field trials were conducted at Gujarat and Chhattisgarh; the formulation received an overwhelming response for the control of insects in Hyacinth bean and Brinjal respectively.

Shri Ganesh Dutt Sharma for his effort to develop and promote new herbal formulation for insect pest control in vegetable and fruits crops has been conferred with various local appreciations. Recently he has been awarded at Rashtrapati Bhavan, New Delhi by Dr. R. A. Mashelkar, Chairperson, National Innovation Foundation – India,during Festival of Innovation-2017 organized by NIF.