Niranjan Bhata: A longer and sweeter variety of brinjal developed by a grassroots innovator 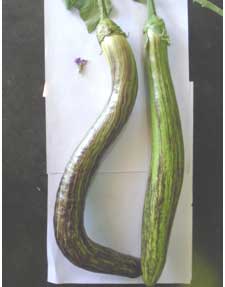 Shri Leela Ram Sahu, a progressive farmer has developed a brinjal variety from a traditional variety in Chhattisgarh. The variety has long fruit size with soft and sweetpulp. The number of fruits per plant is higher as compared to other long brinjal varieties and is tolerant to major insect and pests. This variety of brinjal is appreciated by farmers for its long fruit size and higher yield.

This variety was developed by mass selection from a traditional variety conserved by his forefathers. Shri Leela Ram has been cultivating the traditional brinjal variety since 1988-89. He started selection in 2010; the criteria of selection were fruit length, spine on stem & calyx, tolerance to pests and disease and more fruits per plant, the variety was finally developed in 2013. 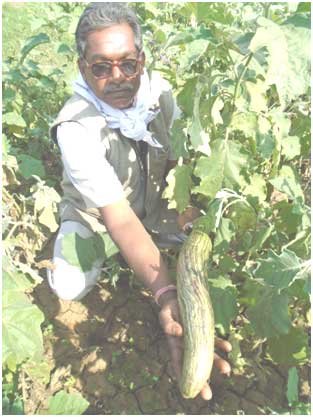 National Innovation Foundation- India (NIF) supported the innovator for on-site evaluation of the variety by Department of Vegetable Science, Indira Gandhi Krishi Vishwavidyalaya (IGKV) Raipur, Chhattisgarh during 2016-17 and during the evaluation it was confirmed that the variety possesses longer (45-60 cm) and good quality fruits. Report also confirmed that the variety has lower instance of insect pest & disease and is valuable cultivar for research purpose. NIF-India had also facilitated the trials of this variety for dissemination in farmers & rsquo; fields of West Bengal, Madhya Pradesh, Bihar, Kerala, Nagaland, Manipur, Tamil Nadu and Gujarat. The results revealed that the variety of brinjal can be cultivated in various locations of Manipur, Gujarat, and Madhya Pradesh giving higher number and long fruits. Performance of Niranjan Bhata in Gujarat was praised by growers, they shared that the production of the variety was good and average length of the fruit was 1.5 to 1.7 feet.

Shri Leela Ram Sahu for his effort to conserve the variety has been conferred with various awards and recognitions, a number of local editions of newspapers have written articles on the variety. Recentlyhe has been honoured with a State award by Hon'ble President of India at Rashtrapati Bhavan, New Delhi during Festival of Innovation-2017 organized by NIF-India. 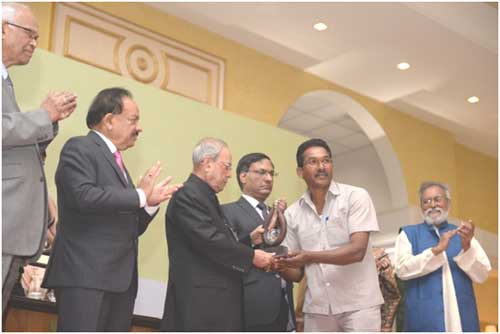 For availing the seeds of the variety the innovator may be contacted at: Shri Leela Ram Sahu (09826148629), At & Post - Dhuma, Block-Kurud, Dhamtari, Chhattisgarh