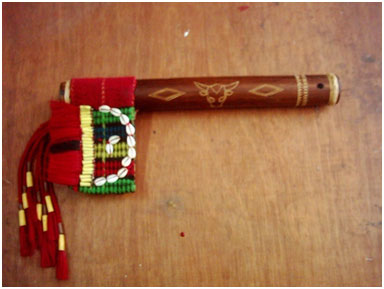 Moa Subong (56) is a musician who has developed a musical instrument called BamHum, which is a new wind musical instrument made out of bamboo. The name BamHum is derived from the two words, bamboo and humming. Playing the BamHum is simple; one has to simply hum a tune into the hum hole that produces a melodic tune.

Moa Subong made the BamHum to help her wife in 2005. He was successful in creating this musical instrument within a year. Mrs. Arenla Subong is a music guru and taught music to pupils in a cultural centre. Both of them are folk fusion artists who are improvising and contemporizing traditional music and songs. Being a vocalist, she faced problems while making music, as the traditional instruments were beat or percussion based, playing various notes was not possible.

This is a very simple musical instrument, which anyone can start using within a few minutes to play music. The novelty is its simplicity in construction and ease of using. This can be alone used to hum songs, even by a novice, as part of a musical choir and as the lead instrument providing playback (of songs) as in instrumental songs. It can be used from right to left or vice versa, top to down or vice versa, the user has full flexibility to use it in any way she wishes or can creatively use. It blends well with other musical instruments and can be used for any genres of music.